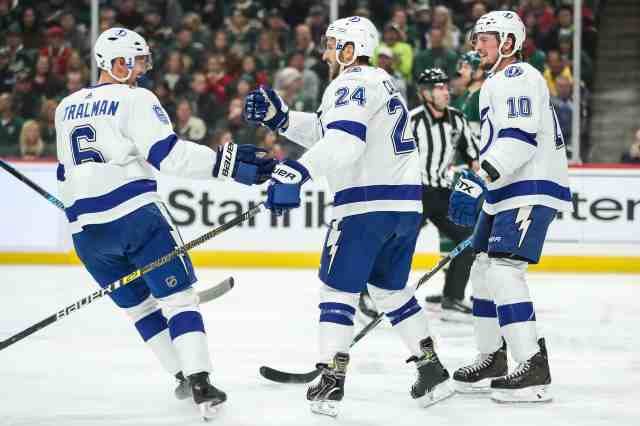 Keys to the Lightning’s offseason

Greg Wyshynski and Chris Peters of ESPN: Looking at the keys of the Lightning’s offseason.

Don’t panic: They have a large, talented core that is under 30-years old that will be returning next year and will be contending again.

That said, see a therapist: Tyler Johnson admitted that they lost their confidence after blowing a 3-0 lead in Game 1.

Address their blueline: Pending UFA defensemen include Anton Stralman (32), Braydon Coburn (34), Dan Girardi (34) and Jan Rutta (28). That is $13.4 million coming off the books. Could they take a run at Erik Karlsson?

Joe Smith of The Athletic: Tampa Bay Lightning GM Julien BriseBois didn’t make any moves ahead of the trade deadline.

Don’t expect any drastic changes this offseason for the Lightning.

Their blue line will have a different look with pending UFAs Braydon Coburn, Dan Girardi and Anton Stralman.

Forward Ryan Callahan could be a buyout or trade candidate. He has a year left at $5.8 million.

They could look to move out a forward to create a slot for a young prospect.

Bobrovsky is going to get paid

Eastern executives believe Bobrovsky is going to get a lot of attention this offseason and that he’s going to “get paid, well.”

Bobrovsky’s past playoff performances have some thinking he still needs to prove himself on that front.

“In this business, you aren’t considered a `bona fide goaltender’ until you deliver your team a playoff win,’’ he said. “Bobrovsky has yet to deliver. If he can do that in the 2019 Stanley Cup playoffs, he will write his next ticket.’’