In today’s Rumor Rundown we look at the most popular names on the trade market. One day after a big trade that sent defensemen Dion Phaneuf to the Los Angeles Kings, will the dominos fall when it comes to other trades that might have been contemplated? What is the standing on trades that include players like Rick Nash, Max Pacioretty, Mike Hoffman, Derick Brassard and others?

The Senators Got the Ball Rolling

By trading Phaneuf, the Senators opened the trade market for business. Interestingly enough, they also have a number of other high-interest players available before the deadline. The TSN Insiders asked if the Sens also both the top center and top winger available in the market in Derick Brassard and Mike Hoffman. At the very least, Dreger suggests there’s a strong market for both. 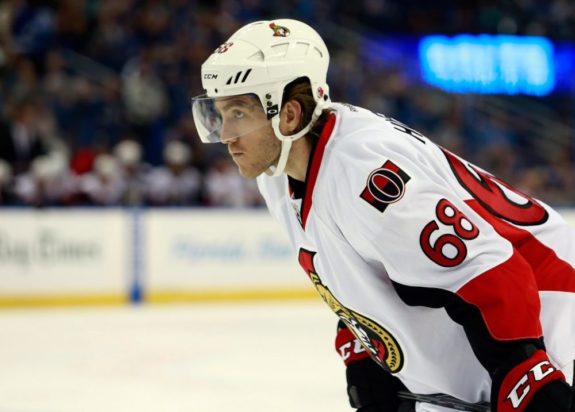 Elliotte Friedman of Sportsnet noted that the Sens would prefer to retain center Derick Brassard but that the teams who have the interest may offer enough to warrant moving him. Those teams are rumored to be the Pittsburgh Penguins and San Jose Sharks.

There is a better than good chance that Hoffman is moved and add Zach Smith to the list of players who might be leaving Ottawa. Friedman suggested the Calgary Flames might have had interest but was told by a source it wasn’t Smith who the Flames were after.

Max Domi and a Fresh Start?

Could the Arizona Coyotes be considering a move the ships out young star Max Domi? If they are, count the Montreal Canadiens in as a team that would be interested.

Domi has struggled this season and “pending a fair offer” either at the trade deadline or during the NHL Draft in June, he could be moved. TSN’s Bob McKenzie notes, the Coyotes won’t admit they are shopping Domi but the word around the NHL is that he’s “imminently available.”

The asking price is steep and other NHL teams may not be willing to meet it so there’s no guarantee that he moves before the deadline. It’s possible the Coyotes hold onto him, try and have him sign a bridge deal and see if he rebounds with better production next season.

Nash and the Predators

It seems that there are a couple teams with interest in Rangers’ forward Rick Nash but leading the way are the Nashville Predators who are “all-in” for a run in the playoffs and believe Nash is their guy. If the Predators do acquire him, it sounds like they will have to win a bidding war to do so.

The Predators may be competing with the Tampa Bay Lightning who are also rumored to have interest but might not be willing to pay as steep an asking price. They do have the prospects and picks the Rangers would be seeking but GM Steve Yzerman may not see a guaranteed rental as worthy of moving those pieces.

Elliotte Friedman of Sportsnet said he could see the Florida Panthers sneaking in out of left field to obtain Max Pacioretty. The Panthers have the young assets to entice the Canadiens but the question is would they be willing to give up a top-line center of top-two defensemen which is the rumored asking price?

In the meantime, the Canadiens might also move Tomas Plekanec even though Plekanec wants to stay in Montreal. The Canadiens might not be set on moving Plekanec but if an offer is out there that GM Marc Bergevin likes, it’s fair to suggest that deal gets done. Rory Boylen lists the Pittsburgh Penguins, Minnesota Wild and San Jose Sharks as potential trade destinations for Plekanec.

Are the Flyers Buyers?

Friedman also reports that after the Philadelphia Flyers woke up “Wednesday five points into the playoffs,” they might be looking to make a couple trades to improve the roster.

Dave Isaac of the Courier-Post ventured a guess that the Flyers could shop for a goaltender now that starter Brian Elliott is sidelined for several weeks. He suggests pursuing Calvin Pickard while Friedman suggests the Sabres starter Robin Lehner if the asking price is not high (he notes that seems unlikely). Detroit’s Petr Mrazek might be another name to keep an eye on.

The Pittsburgh Penguins have next to no cap room so any trade would have to include sending salary out to take more salary in. That means, even if players like Plekanec or Brassard became available to the Pens, there is a lot more than just making a trade to be done for the Penguins to be players there. 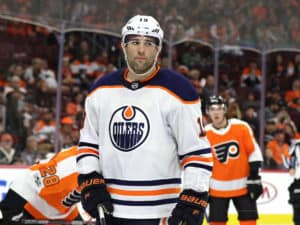 Patrick Maroon has had an impact on both sides of the puck. (Amy Irvin / The Hockey Writers)

The Tampa Bay Lightning might be looking at Edmonton’s Patrick Maroon and/or Mark Letestu. Maroon is seen as one of the better wingers available at the deadline and his contract is friendly for any team to acquire him as a rental.

There is some uncertainty as to whether or not the Anaheim Ducks are buying or selling at this year’s deadline. That makes predicting what happens to center Antoine Vermette difficult.

New York Islanders GM Garth Snow has gone on record saying he won’t part with his two first-round picks in this year’s draft. Both could become lottery picks, giving the Isles a shot at moving up higher in the draft order.