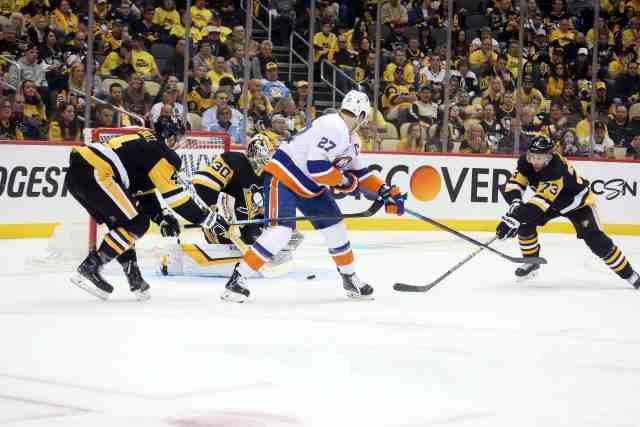 The Penguins may need to find a new strategy on how best to compete next season, and that direction should probably involve more speed.

The team played to individualistic and were mistake prone.

“I don’t have an answer for it. The reality is we win as a group, and we lose a group and we’re all a part of it. We’ve all got to take responsibility. It’s disappointing,” said Sullivan regarding his team’s March to April disparity. “We had high expectations of this team. We believe we have good players, and we have the potential to be a good team, and we obviously did not play well enough to win.”

Evgeny Malkin won’t be moved unless he asks to be traded.

Dan Kingerski of Pittsburgh Hockey Now: When talking about next season, Phil Kessel said “we’ll see,” wither regards to whether he’ll be back next season or not.

Kessel carries a $6.8 million salary cap hit and it is unlikely that he’ll be around for their retool.

Currently, the Penguins will have five core players that will be 31 or older and carry a combined $37.55 million cap hit.

Kevin Gorman of the Pittsburgh Tribune: The Penguins will take a step back and take a look at what changes can be made.

“When you don’t meet those expectations, then everybody else’s got to take a step back and soul search and find out what we learn from it. What are the takeaways and how do we get better?” Sullivan said. “What those answers are, it’s hard for me to say right now.”

Sidney Crosby and Evgeny Malkin are staying. Kris Letang, Matt Murray and Jake Guentzel should be untouchables as well.

The Penguins will likely move a bottom-four defenseman. Justin Schultz with one-year at $5.5 million could be a prime candidate. Olli Maatta, Jack Johnson and Erik Gudbranson could be options as well.

Phil Kessel could be another trade option, but they shouldn’t look to trade him just to trade someone.

Olli Maatta on his future with the Penguins pic.twitter.com/7ly573vANA