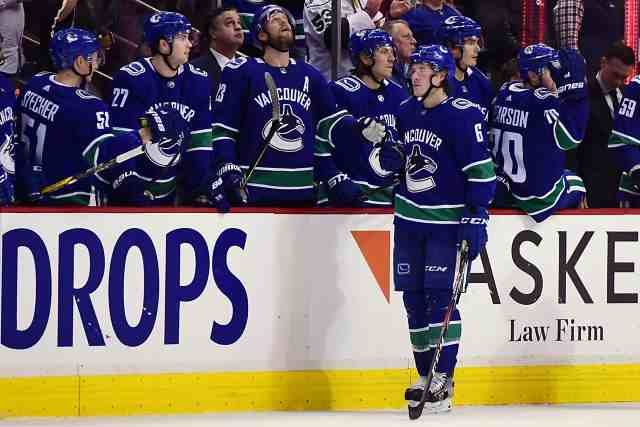 Boeser’s camp open to anything

Rick Dhaliwal: (last week) Vancouver Canucks Brock Boeser‘s agent Ben Hankinson on Sportsnet 650: “There are some big contracts coming down the pipe and Brock just trying to figure out where I fit in all of this. We are open to anything with the #Canucks.”

Rick Dhaliwal:  Hankinson on Boeser’s contract situation: “We will figure it out, whether it’s a 1 year deal or 8 year deal, something is going to happen in between now and 6 months from now.”

Ben Kuzma of the Vancouver Province: Canucks GM Jim Benning said he will be aggressive trying to fill two roster weaknesses for the Canucks – a top-six right winger and a top-four defenseman. A task that may not be easy.

Free agency may not be an option with only $8.4 million in salary cap space and some pending free agents that need new contracts.

A right-handed partner for Alex Edler would be ideal as then Quinn Hughes could be paired with Chris Tanev, and Ben Hutton–Troy Stecher could be kept together.

Winnipeg Jets pending UFA Tyler Myers would be a free agent option, but it could cost more than the $5.5 million per deal he’s coming off.

Going the trade route for a right-handed defenseman could be less costly.

The Canucks will need to decide if they want to re-sign UFA Luke Schenn.

Ben Kuzma of the Vancouver Province: Canucks GM Jim Benning knows that for playoff hockey you do need some players who are big and tough enough.

“Yeah, of course I do,” he said. “The playoffs are fast, physical and hard. We’ve had those conversations (this week) because some of our skilled players aren’t the biggest guys. Do we need to make sure we surround them with players who can supply that physicality as well as being good enough players to help our younger guys develop?”

The Canucks signed Antoine Roussel last offseason and have prospects in Zack MacEwen and Johan Gadjovich.