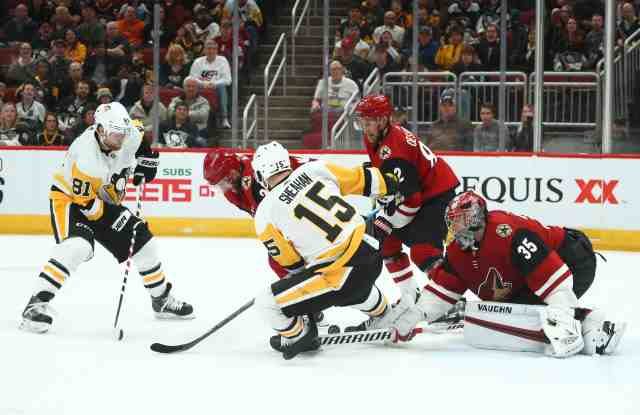 The Penguins may have to look at moving Letang?

Sean Tierney: Elliotte Friedman on his 31 Thoughts podcast with suggested that the Pittsburgh Penguins may need to look at trading defenseman Kris Letang first if they really want to start collecting significant assets.

Jeff Marek asks Letang before Phil Kessel, to which Friedman answers: “I’m not sure what Kessel’s value is.”

Dan Kingerski: Believe that it would very hard for the Penguins to trade Kris Letang as they would already need to have in place someone that could fill his spot before they even think about trading him.

Sean Tierney: Elliotte Friedman speculates on his 31 Thoughts podcast that the Arizona Coyotes could be a team that is interested in Penguins Phil Kessel.

Friedman adds that when Kessel’s name came up in trade rumors earlier in the season, the Coyotes were one of the teams that “kicked tires.”

Free agent and trade option for the Coyotes

Craig Morgan of The Athletic: Arizona Coyotes GM John Chayka hopes to upgrade his roster internally, but will likely need to go the free agent or trade route as well.

It’s likely that pending free agent Richard Panik will be back. Unsure if pending RFAs Josh Archibald and Nick Cousins will return.

The Coyotes are looking for scoring wingers, and though unlikely, a No. 1 center.

A top-four right-handed defenseman could also be on their list, but they would likely then need to move Alex Goligoski who has two years left at $5.475 million.

Doubtful to see an offer sheet for Mitch Marner and Brayden Point.

The Toronto Maple Leafs have cap issues and the Coyotes could look to help them out by taking a young forward back along with Patrick Marleau‘s contract – a year left at $6.25 million but less salary. A no-movement clause may nix any type of deal.

The Maple Leafs may need to move one of Andreas Johnsson, Kasperi Kapanen or William Nylander if they want to improve their blue line.