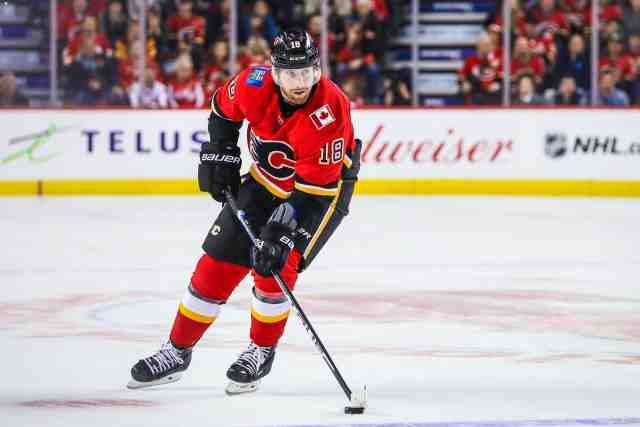 Keys to the Calgary Flames offseason

ESPN: Looking at the keys to the Calgary Flames offseason.

Assess their goaltending – Mike Smith had a good playoff, but the pending unrestricted free agent only posted .898 save percentage during the regular season.

26-year old David Rittich is a pending RFA. One-time goalie of the future Jon Gillies had a terrible AHL season.

Do they go looking for a goalie this offseason?

Sign Matthew Tkachuk – Sam Bennett‘s contract shouldn’t be hard to get done. Tkachuk is going to get a big deal. Will he end up making more than Johnny Gaudreau‘s $6.75 million?

Find a bad contract in exchange for James Neal‘s contract – Neal has four years left on his contract at a $5.75 million salary cap hit. Neal had never scored less than 20 goals in a season. He recorded seven goals and 12 assists in 63 games this past year. Can the Flames find a taker?

Could the Flames and Sabres work out a deal?

Brian Costello of The Hockey News: James Neal in Calgary needs to find an end. It hasn’t worked since day 1 and ended with a healthy scratch.

Would the Flames be able to find a partner for a bad contract-for-bad contract trade?

Would a Neal for Kyle Okposo trade work? Okposo has four years left as well but at a $6 million cap hit.

It’s a deal that could work for both players and both teams.

If the Jets move on from Maurice, the Sabres should be interested

Lance Lysowski: If the Winnipeg Jets were to fire Paul Maurice, he should be at the top of the Buffalo Sabres list of potential head coaches.

All-star Saroya Tinker represents more than the Six, she represents Black girls as she pushes for change in hockey’s culture
Windsor Spitfires’ Weekly: 3 Takes from 2022-23 Northern Swing
Tynan, Frank, Wallstedt named award winners for January
3 Unexpected Blue Jackets Who Should Be on the Trade Block
Connor Bedard’s NHL future looms — but his focus is still on Regina