The Philadelphia Flyers removed a statue of late singer Kate Smith outside NHL team’s arena Sunday, two days after covering it amid allegations of racism against the 1930s star with a popular recording of God Bless America.

“The NHL principle ‘Hockey is for Everyone’ is at the heart of everything the Flyers stand for,” Flyers president Paul Holmgren said in a statement. “As a result, we cannot stand idle while material from another era gets in the way of who we are today.”

On Friday, the Flyers said Smith’s God Bless America recording had been removed from their library, following a similar move by MLB’s New York Yankees.

The Yankees suspended use of Smith’s recording during the seventh-inning stretch amid conflicting claims about several of her songs, including a 1939 song entitled That’s Why the Darkies Were Born. The tune originated in the 1931 Broadway revue George White’s Scandals, and was considered satire at the time. Smith’s likeness also appears in a 1939 ad that heavily uses the mammy caricature, one of the most well-known racist depictions of black women.

Smith’s connection with the Flyers started in 1969 when a team executive ordered her version of God Bless America to be played instead of The Star Spangled Banner. That led to her performing the song several times before games in the 1970s. A year after her death in 1986, the team erected the statue. 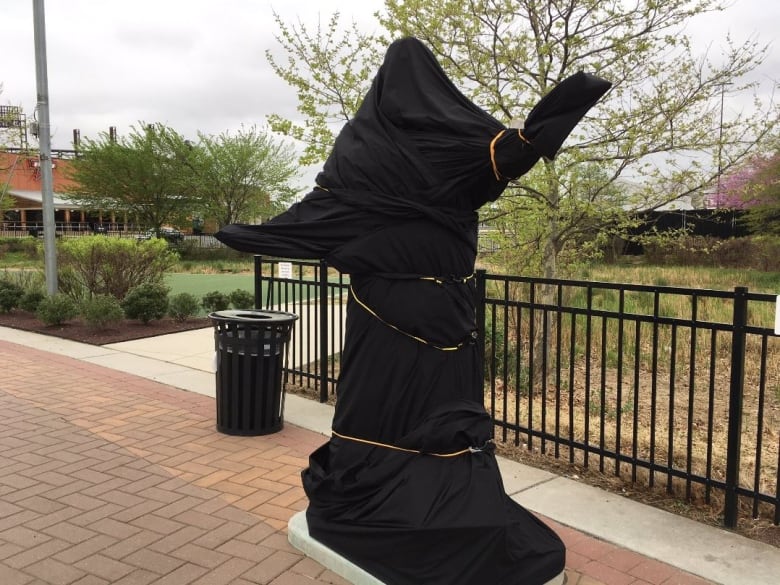 This statue of American singer Kate Smith outside of Wells Fargo Center, where the Philadelphia Flyers play, has been covered amid reports the team will stop using her rendition of God Bless America due to racist lyrics in her other work. (Mike DeNardo/Twitter)