The pace and excitement of 3-on-3 overtime isn’t just a thrill for hockey fans — NHL players love it too.

An Associated Press/Canadian Press survey of NHLPA representatives from all 31 teams found that 97 per cent of those polled enjoy the league’s current OT format.

The survey also shows there are other rules the athletes are less thrilled with, ranging from delay-of-game penalties to confusion about goalie interference.

And the 3-on-3 period is popular, Arizona Coyotes defenceman Kevin Connauton says the worst rule in hockey is resolving a game with a shootout when overtime fails to produce a winner.

“I don’t really like the shootout,” he said. “I think you just play 3-on-3 and eventually someone will score.”

The survey found that 30 players like the 3-on-3 setup, while one player said he doesn’t. Playing a five-minute 3-on-3 period provides a fair way to end the game while allowing fans to see some pure skill, said Toronto Maple Leafs centre John Tavares.

“[It’s] exciting and you see the best players in the world with that type of time and space,” he said. “It goes to show it’s a good way to end games. There’s no perfect science to this. We want a winner, but we can’t play forever. It’s a great way to showcase the talent, the skill of the game.”

But the pace can be tough for the guys on the ice, said New Jersey Devils netminder Cory Schneider.

“I hate it as a goalie, but I like it as a hockey fan,” he said. “I think it’s better than the shootout, for sure. And I know it’s not perfect, but it gets you a decision, it gets people excited, you see some amazing skill and the way the league is now, it’s a great showcase for what these guys can do.”

The NHL moved from 4-on-4 OT in the 2015-16 regular season in a bid to create more space on the ice, allow for more goals and reduce the number of games going to shootouts. In the post-season, OT is in 20-minute, sudden-death periods at 5-on-5. There are no shootouts.

Radko Gudas liked the previous 4-on-4 setup better and said having fewer players on the ice is too much like “summertime hockey.”

“You work your bag off 60 minutes 5-on-5 and then all of a sudden it’s 3-on-3, a speedier, faster guy pretty much wins,” said the Philadelphia Flyers defenceman. “I think 4-on-4 would be more hockey-like situations than 3-on-3.”

It should be the same as an icing. Whistle, faceoff in your end, no ability to change.— Avalanche defenceman Ian Cole on  delay of game call for shooting a puck over the glass

Dylan DeMelo of the Ottawa Senators loves 3-on-3, but said there’s one tweak he’d like to make. The defenceman wants to see a rule put in place that would stop players from taking the puck over centre ice and then back again to regroup.

The move would make overtime even more entertaining, DeMelo said.

There are a number of other rules players would love to see changed, including 63.2 which stipulates that a puck shot or batted over the glass earns a delay of game penalty.

“I don’t think it should be a penalty. I think it should be the same as an icing. Whistle, faceoff in your end, no ability to change,” said Colorado Avalanche defenceman Ian Cole, one of five players (16 per cent) who said the rule is the worst in hockey.

“A penalty for a play that has a high chance to happen in a course of a game or a [penalty kill] or whatever, it seems a little drastic.”

For other players, the uncertainty around rules the goalie interference rule is particularly irritating.

Three players (10 per cent) said inconsistency or a “grey area” around the measure is their least-favourite part of the NHL rule book. 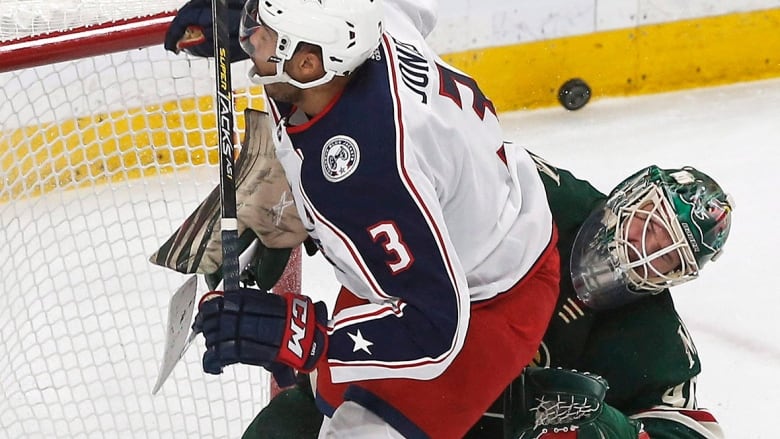 Many NHL players, including Oilers defenceman Darnell Nurse (not pictured) continue to be confused as to what does/doesn’t warrant a goalie interference penalty. “Things happen so fast on the ice that judgment calls are hard to make,” he says. (Jim Mone/Associated Press)

“What is goaltender interference and what’s not?” said Edmonton Oilers defenceman Darnell Nurse. “Maybe having more of a clear line, but any time you talk about something within the game, things happen so fast out there that judgment calls and whatnot, they’re hard to make.”

Goalie interference review is flawed. Games are being lost in the playoffs.— Flyers goaltender Cam Talbot

According to the league, there are only two situations where goaltender interference should result in a disallowed goal: if an attacking player stops the goalie from being able to move freely within his crease or defend his goal, or an attacking player intentionally or deliberately makes contact with the goalie.

But some players say what counts as interference in one game might not be the same in the next.

On Friday, Flyers goalie Cam Talbot tweeted his dissatisfaction with how the rule was applied in the Leafs 2-1 win over the Boston Bruins.

“Once again the NHL goalie interference review is flawed,” Talbot wrote. “Someone that’s played the game in the blue paint should be in the situation room. Games are being lost in the playoffs and it’s not right.”

Three players (10 per cent) said what they most dislike is offside reviews. Nine NHLers named another rule, including tripping being called alongside diving, and the ban on time outs being used when the puck is iced.

Eleven others didn’t give a firm answer when asked what’s the worst rule in hockey.

“Rules are the rules. I just follow them,” said the left-winger.