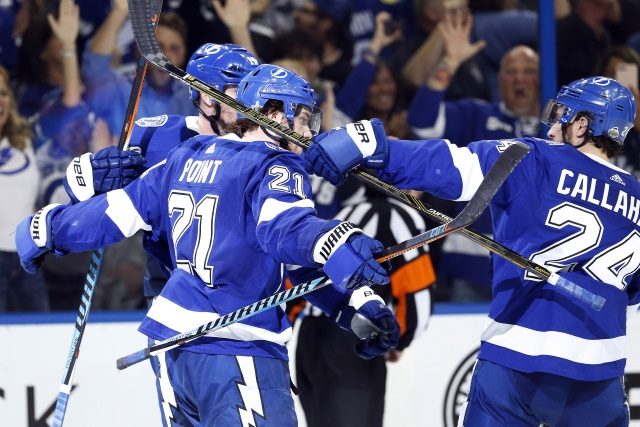 Lightning will have some tough decisions to make this offseason

Larry Brooks of the NY Post: The Tampa Bay Lightning lost Victor Hedman for their final two games. The Lightning didn’t add any depth to their blue line at the trade deadline.

was told at the deadline that GM Julien BriseBois “was more than a bit snooty in fielding calls.”

RFA Brayden Point is going to get a big raise from the Lightning or through an offer sheet.

To create the needed salary cap room, BriseBois may look to trade J.T. Miller, who has four years left at $5.25 million per. Forward Ryan Callahan will likely be bought out.

They could move out a forward and try to re-work their middle-six to make them “better suited for playoff hockey.”

Their blueline will also be getting a makeover.

The Lightning don’t have a lot of roster flexibility because of no-trade and no-movement clauses. They have around $6 million in salary cap space with free agents to re-sign.

Ken Campbell of The Hockey News: With only about $6 million in salary cap space – they need to re-sign Braydon Point, rebuild their blueline, and must take into consideration that Andrei Vasilevskiy will need a new contract after next season.

Could they find a team willing to take on Ryan Callahan’s salary along with some assets?

Could they look to trade Point’s rights or take the assets if he were to get offer sheeted.