Tuukka Rask made 32 saves as the Boston Bruins downed the Toronto Maple Leafs 5-1 on Tuesday to win their best-of-seven Eastern Conference quarterfinal 4-3.

Sean Kuraly and Joakim Nordstrom, with a goal and an assist each, and Marcus Johansson scored for Boston before Charlie Coyle and Patrice Bergeron both added empty-net goals.

The Bruins have now defeated the Leafs in Game 7 in the opening round of the playoffs three of the last seven seasons, with each clincher coming at TD Garden.

Boston also took down Toronto 7-4 last spring, becoming the first team in NHL history to battle back from three deficits of at least one goal to win a Game 7 in regulation. That came five years after the Bruins’ 5-4 overtime victory in 2013 — the first time a team had won a Game 7 after trailing by three goals in the third period.

The crushing result for the Leafs means more heartbreak for a franchise that has failed to advance to the second round of the playoffs since 2004 and has not won the Stanley Cup since 1967.

The Bruins will now take on the Columbus Blue Jackets after the conference’s eighth seed swept the Presidents’ Trophy-winning Tampa Bay Lightning in the first round.

That alone makes Tuesday a bitter pill to swallow for the Leafs, with Tampa just one of a number of favourites to have already fallen by the wayside.

Toronto was Canada’s last hope of ending a 26-year Cup drought following the elimination of both the Calgary Flames and Winnipeg Jets.

The series was a back-and-forth slugfest featuring razor-thin margins. Neither team managed to put together consecutive victories until the Bruins won 4-2 in Game 6 on Sunday to stave off elimination in Toronto before taking Tuesday’s winner-take-all showdown. 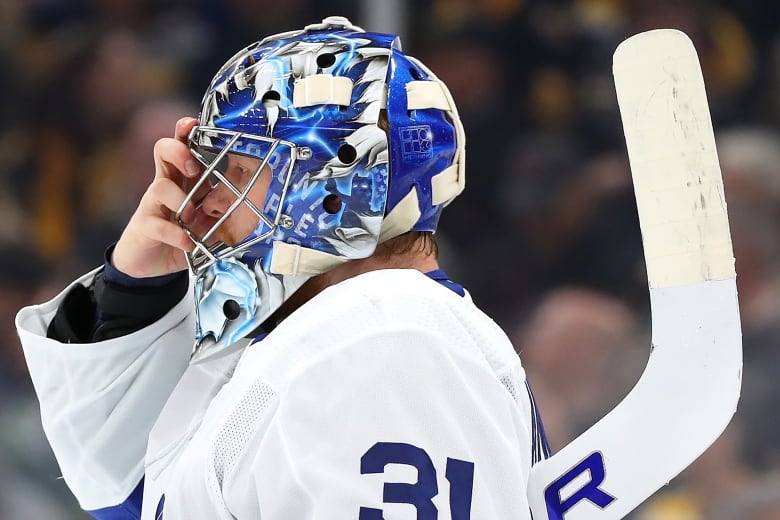 Toronto’s Frederik Andersen adjusts his mask after Boston’s Marcus Johansson scored during the first period of the Maple Leafs’ season-ending 5-1 loss to the Bruins in Game 7 of their first-round series on Tuesday. (Maddie Meyer/Getty Images)

“You get so used to just being in it every day, competing and keep finding ways to get better and keep pushing forward,” said Tavares. “It’s still sinking in that we won’t be doing that (on Wednesday). That’s the hardest part.”

The Leafs actually started well enough after enduring an early Boston flurry. Rask stopped an Auston Matthews one-timer from the slot and two quick Marner shots off the rush before the roof caved in.

Toronto defenceman Travis Dermott turned the puck over on a clearing attempt and the puck eventually fell to Nordstrom, who squeezed his second of the series between Andersen’s glove and pad on the shortside with 5:31 left in the first as Boston’s fourth line struck.

Jake Gardiner — Dermott’s blue-line partner — then inexplicably played the puck off the boards behind his own net to no one in particular. It was quickly scooped up by Johansson, and he wheeled out in front before beating Andersen on a shot off the far post for his first with 2:14 remaining in the period.

Gardiner, who missed a chunk of the second half of the season with a back injury, was an ugly minus-5 in last spring’s Game 7 loss to Boston, falling on his sword and taking more than his share of the blame in an emotional exchange with reporters as the cameras rolled. 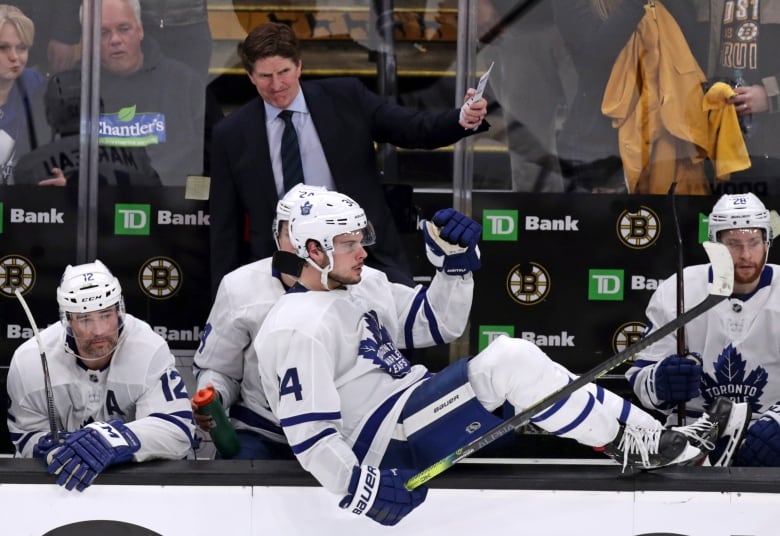 Matthews sits on the boards as head coach Mike Babcock gestures to his players during the final seconds of the third period. (Charles Krupa/The Associated Press)

The Leafs responded well to open Tuesday’s second period, with Tyler Ennis separating John Moore from the puck along the boards and finding Tavares, who buried his second beyond Rask’s blocker at 3:54.

Toronto kept coming with a number of chances, but Rask denied Ennis and Trevor Moore from in close.

A Leafs power play that was just 3 for 14 coming into Game 7 got a chance midway through the period, but despite a wrinkle that saw Matthews and Marner switch sides, were unable to connect. 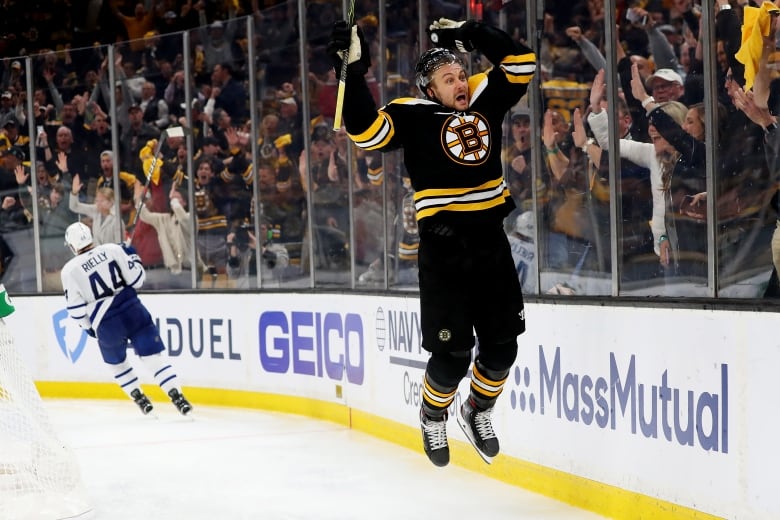 Kuraly celebrates his goal that put the Bruins up 3-1 in the third period. (Maddie Meyer/Getty Images)

The Bruins came with a push to start the third period, and Kuraly made Toronto pay when stepped around Ron Hainsey in the neutral zone and beat Andersen with his first of the playoffs on a shot over his left shoulder that the Leafs goalie will want back at 2:40.

Toronto got its second power play five minutes into the third, but couldn’t do anything with the man advantage.

TD Garden then roared its approval as the minutes and seconds ticked down towards another Game 7 victory for the Bruins over their rivals before Coyle made it 4-1 into an empty net.