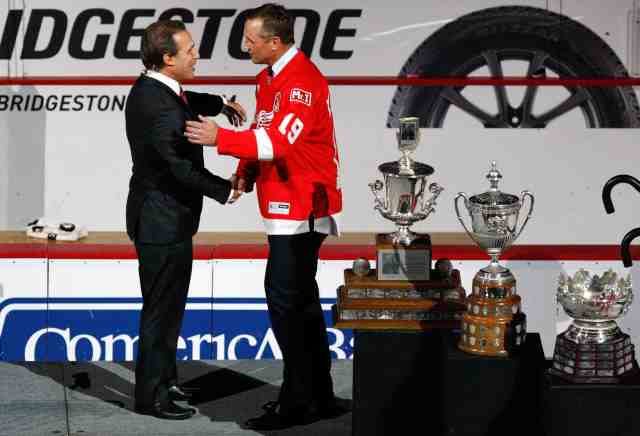 Holland won’t be heading to Edmonton

Darren Dreger: It is believed that Ken Holland has withdrawn his name from being an option for the Edmonton Oilers vacant GM position. He would have been a good option for the Oilers. A position with Seattle is intriguing.

Will Lightning staff be following Yzerman out the door?

Joe Smith: Steve Yzerman had brought in most of the Tampa Bay Lightning’s hockey operations and scouting staff.

Don’t see a large exit of people, but GM Julien BriseBois said that he wouldn’t stop anyone from “improving their lot.”

What could be on Yzerman’s agenda?

John Shannon: Was told the Ken Holland was the man behind bringing Yzerman back to Detroit. He had been working on it for the past three months.

Helene St. James of the Detroit Free Press: What Yzerman might have on his agenda for the Red Wings.

Buyouts – Yzerman has a history of buying out players but it’s unlikely they will go that route. Buying out Justin Abdelkader would mean he’d be on the books for eight years at between $1.145 and $2.395 million per season. Jonathan Eriksson only has a year left on his deal, so it doesn’t make much sense.

Free Agency – The Wings will have around $15 to $20 million in cap space this offseason. Erik Karlsson is an intriguing name that could be available.

What’s next? – Getting Yzerman named early allows more prep time for getting more familiar with the organization and working on any trades leading up to the draft.

Ansar Khan of MLive: It’s doubtful the Steve Yzerman will make any coaching and/or management changes in Detroit.

Lightning assistant GM Pat Verbeek has been rumored to possibly be joining Yzerman, but they may wait until after next season.

The Red Wings have pending UFAs in Niklas Kronwall, Thomas Vanek and Luke Witkowski. Former GM Ken Holland had said they were interested in re-signing Kronwall.

The Red Wings hold the sixth pick in the draft, three second round picks and 10 picks total. They could use some help on the blueline.

Will have plenty of cap space available this offseason, but they’ll need to keep in mind that Andreas Athanasiou, Anthony Mantha and Tyler Bertuzzi will need new deals the following year.