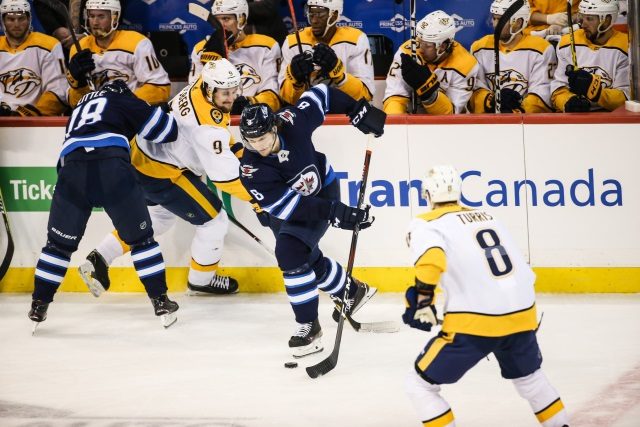 Mike McIntyre: Winnipeg Jets pending restricted free agent defenseman Jacob Trouba on if he is wanting to sign a long-term deal with the Jets: “Same answer as always. I’ll figure it out once things get going in the summer, what’s best and move forward from there. We’ve got to sit down and kind of have a meeting and figure out what to do.”

Ken Wiebe of the Winnipeg Sun: Trouba when asked if becoming a UFA after next season was important for him.

Trouba went through salary arbitration last offseason and said that it would be an option again, but it’s not a fun route.

Jets GM Kevin Cheveldayoff when asked about Trouba’s status and if it was important for them to get some clarity this offseason.

“I’m not going to get into any of those types of discussions,” said Cheveldayoff. “We’ll do what’s right for the organization.”

Keys to the Nashville Predators offseason

Emily Kaplan and Chris Peters of ESPN: Looking at the keys to the Nashville Predators offseason.

To stay the course, or not stay the course – Do they look to make big changes or do they believe their core has what it takes? On paper, they are better than the team that made the Final in 2017.

Acquire forward depth – Aside from their top line, there have been concerns. Kyle Turris hasn’t been the second-line center they had hoped. With their salary cap situation, they are going to need to get creative.

Part ways with a few players – The Predators don’t really have any tough free agent decisions. It seems unlikely that any of their pending unrestricted free agents are going to return – Brian Boyle, Wayne Simmonds, Cody McLeod and Zac Rinaldo.