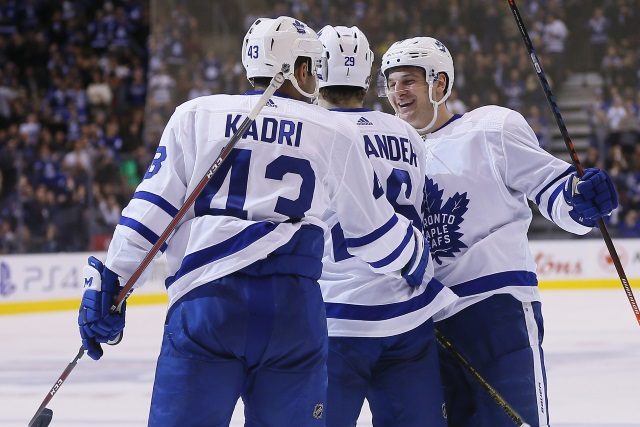 Greg Wyshynski and Chris Peters of ESPN: Looking at the keys to the Toronto Maple Leafs offseason.

The Nazem Kadri question – A salary cap hit of $4.5 million through 2021-22. A solid third-line center for the Maple Leafs but has been suspended in each of the past two playoff series against the Bruins. Can they continue to trust him?

Improve the blue line – Both Ron Hainsey and Jake Gardiner are unrestricted free agents and likely gone. Nikita Zaitsev is a $4.5 million cap hit through 2024. They have some young guys in Timothy Liljegren, Rasmus Sandin and Calle Rosen but they need to look elsewhere. William Nylander rumors begin.

Mitch Marner‘s contract – Marner won’t take a discount after what the Leafs signed Auston Matthews for. Marner has more points than Matthews but in more games.

Whither Babcock? He’s halfway through his eight-year, $50 million contract. They haven’t advanced past the first round in the past three years. His player usage is under fire. His contract situation will likely mean he’s back.

Some changes will be coming

Steve Simmons of the Toronto Sun: When Mitch Marner signs an extension, the Leafs will have around $40 million invested in Auston Matthews, John Tavares, William Nylander and Marner.

The Maple Leafs need to find a way to get rid of Patrick Marleau‘s contract.

The Leafs also have to re-sign RFAs Andreas Johnsson and Kasperi Kapanen.

Mike Augello: “We’ll have lots of time to analyze what the #Leafs will do this summer, but you likely have seen the last of Gardiner, Hainsey, Marleau and possibly Nylander or Kadri. Some leaving via free agency, some retiring, some traded for cap reasons.”

Igor Eronko: The Maple Leafs are one of the few remaining teams that are in on Ilya Mikheyev – a 24-year old KHL right winger.

Darren Dreger: Eronko’s report is accurate. The Leafs have been after him for a while. The Golden Knights and possibly the Blackhawks are interested as well. A decision is likely coming this weekend.

@berezin_goal: Dreger said that it’s an 80 percent chance that Mikheyev signs with the Leafs. 30 teams showed some interested, with the lone team not showing interest being a Canadian team.