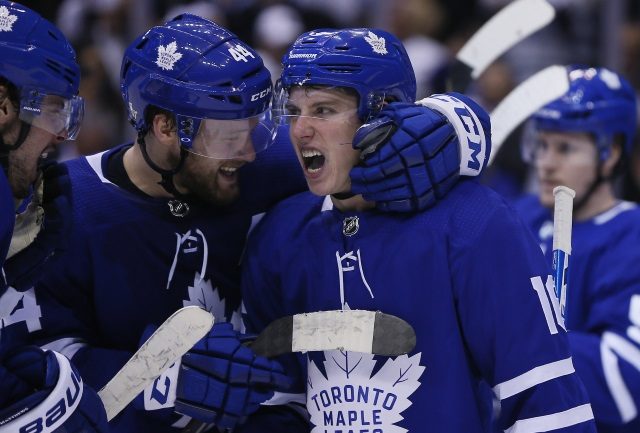 Three defensemen who may not be back

Darren Dreger: Toronto Maple Leafs pending UFA defenseman Jake Gardiner will get at least $6 million per year on his next deal. Term and the structure of the deal will be very important.

Jonas Siegel: Gardiner on if he’s played his last game in a Maple Leafs jersey: “It could be. We’ll see what happens this summer.”

Chris Johnston: Pending UFA defenseman Ron Hainsey on his future: “Even if I had a plan I wouldn’t tell you guys.”

Darren Dreger: There is a good chance that defenseman Igor Ozhiganov will be returning to the KHL this offseason. It’s not saying that the Maple Leafs aren’t interested in re-signing the right-handed defenseman.

Some regrets for Nylander

Chris Johnston: Leafs forward William Nylander said there are some regrets with the way his contract situation when down before he signed, and how it had impacted his play: “After my performance, I have to change their opinion and play the way I know I can.”

Dave McCarthy: Maple Leafs forward Patrick Marleau said that he plans on being back next season. He said that if he was asked to waive his no-trade clause that he cross that bridge at that time.

Kevin McGran of the Toronto Star: (mailbag) Asked if the Maple Leafs can get out of Marleau’s contract next year: “Maybe, if San Jose wants him back and the Leafs retain salary cap space”

No out clause for Babcock

Kristen Shilton: Maple Leafs GM Kyle Dubas wouldn’t guarantee anyone’s status with the team (Mike Babcock, Nazem Kadri, etc) including himself. Dubas said that Brendan Shanahan will evaluate him first, and then so on.

Pierre LeBrun: There had been speculation that Mike Babcock may have had an “out” in his contract. has been told that there isn’t one and that he remains committed to the Leafs.

Jonas Seigel: Pending RFA Mitch Marner: “It sucks. We believe in this team. We had a lot of confidence in this team. And the season ends early, it sucks. But it’s gotta stay with us. We gotta be hungry for this next year, and make sure we come back pissed off.”

Kevin McGran of the Toronto Star: One agent thinks Marner should get as much as Auston Matthews on his next deal.

The Star confirmed a Hockey Night in Canada report that the Leafs were close to signing Marner to a long-term deal around $8.5 million a year ago but that the Leafs may have backed away because they didn’t that to set a precedent for Nylander’s deal.