Jordan Staal scored 4:04 into overtime to give the Carolina Hurricanes to 1-0 victory over the New York Islanders on Friday night in the opener of the Eastern Conference semifinal series.

Nino Niederreiter sent a shot that caromed off the end boards and came out to the right side, where Staal quickly put it in off Robin Lehner’s left skate.

Petr Mrazek stopped 31 shots for his fifth career post-season shutout as the Hurricanes won in New York just 48 hours after beating Washington on the road in two overtimes in Game 7 of the first-round series.

Lehner also finished with 31 saves for New York. Back in Brooklyn at Barclays Center after opening the playoffs at the Nassau Coliseum in Uniondale, N.Y., the Islanders were playing for the first time in 10 days after finishing off their first-round sweep of Pittsburgh.

Both teams had their chances and each goalie made plenty of nice saves throughout the game, the first in Carolina’s playoff history to go to overtime tied 0-0.

Cal Clutterbuck stole the puck and fired a short-handed shot from the right circle that Mrazek gloved with 9:09 left in the third. Lehner made several saves on the Hurricanes’ power play, including on a tip by Justin Williams with 8:05 left, to keep it scoreless.

Ryan Pulock fired a slap shot from beyond the left circle that landed in the netting just outside the left goalpost with 4 1/2 minutes remaining in regulation. The arena goal horn sounded and fans started cheering, but the officials immediately waved it off and announced it was no goal.

Jordan Eberle, who scored in each of the four games against Pittsburgh was denied by Mrazek on an odd-man rush less than two minutes into the second period. Lehner had a sensational save on Greg McKegg near the midpoint of the period as he did the split and slid to his left to stop the attempt with his left pad. 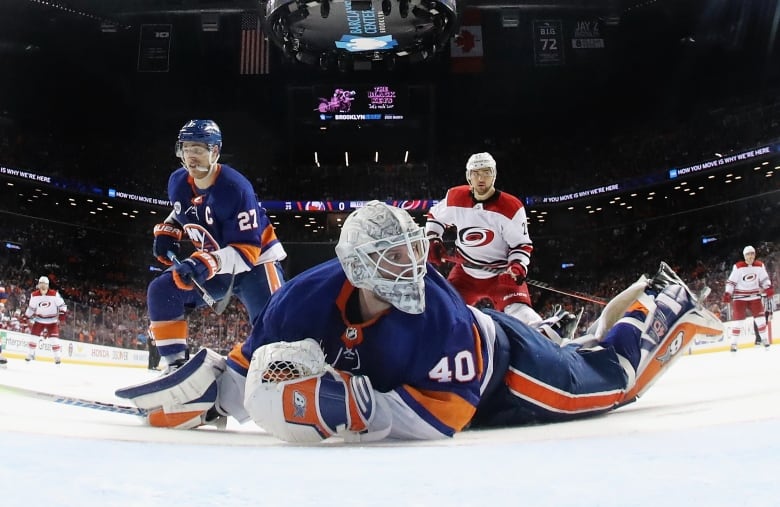 Robin Lehner of the Islanders makes a save against the Hurricanes in Game 1 on Friday. (Bruce Bennett/Getty Images)

Mathew Barzal appeared to give the Islanders the lead with 2:53 left in the middle period, but the goal was immediately waved off and a penalty called on Anders Lee for goalie interference because he fell into Mrazek.

This was the Islanders’ first time back at Barclays Center in more than two months. They split regular-season games between the Brooklyn arena, where they have played since 2015, and the Coliseum, their home the previous 43 years. The Islanders last played at Barclays on Feb. 16 and their two home games in the first round were also on Long Island with any subsequent games they host this post-season to be in Brooklyn.