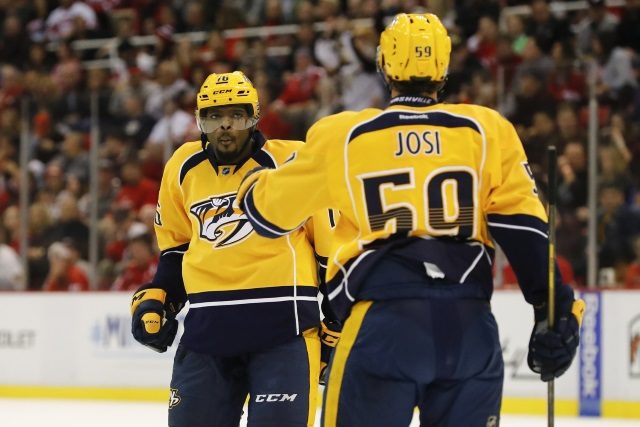 John Glennon: Nashville Predators defenseman Ryan Ellis wouldn’t comment on whether he will need another knee procedure or not.

Rob Stanley: Predators forward Rocco Grimaldi said that he had a strained oblique and a broken rib at the end of the regular season.

Paul Skrbina: Grimaldi also said that he sprained his ankle in Game 4 and wasn’t sure when he’d be able to play after that.

Brooks Bratten: RFA forward Colton Sissons said that wants to stay with the Predators and is looking forward to signing an extension to do so.

Brooks Bratten: Pending UFA forward Wayne Simmonds said he hasn’t thought much about free agency and next season. He wished he’d been able to contribute in the playoffs.

Rob Stanley of NHL.com: Predators defenseman Roman Josi loves it in Nashville, he wants to stay there, the Predators want him to be around long-term.

Josi has a year left on his contract and is eligible for a contract extension after July 1st.

Rob Stanley of NHL.com: GM Poile did say yesterday that there “will be some changes.”

#Preds‘ @PKSubban1 with a lengthy, thoughtful answer on the trade rumors that always seem to swirl around him: pic.twitter.com/7vkx3HJsii