Bishop made 32 saves, Roope Hintz scored twice and the Stars beat the St. Louis Blues 4-2 in Game 2 to even the Western Conference semifinal series.

Bishop grew up in St. Louis and often attended Blues games. He recalled chanting Chicago Blackhawks goalie Ed Belfour’s name as a teenager in the stands. St. Louis fans did the same thing to Bishop on Saturday, screaming his name to try and throw him off his game.

“It’s pretty crazy,” Bishop said. “I was that kid screaming Belfour’s name and then you’re on the ice and they’re screaming your name. Never in a million years when I was watching playoff games as a kid here that I’d be in the net playing against the Blues. Obviously, it’s kind of cool.”

Hintz scored a pair of goals and added an assist as the Dallas Stars beat the St. Louis Blues 4-2. The series shifts to Dallas tied 1-1. 1:59

Miro Heiskanen and Mattias Janmark also scored for the Stars.

Jaden Schwartz and Colton Parayko scored for St. Louis, and Jordan Binnington made 31 saves. The Blues had won three straight.

Game 3 is Monday night in Dallas.

Bishop bounced back after allowing three goals on 20 shots in a 3-2 loss in Game 1 on Thursday night.

“It’s a long season, there’s going to be shots you want to have back,” Bishop said. “Every game is a new game, that’s the way I’ve done it in my career.”

Dallas scored three times in the opening 14:51 before Bishop took over. 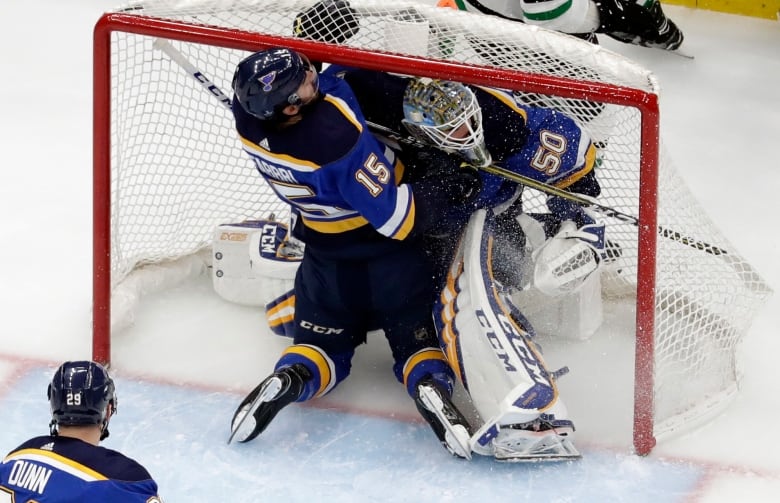 Hintz, who added an empty-net-net goal with 3 seconds left, converted on a pass from Mats Zuccarello at 7:11. Heiskanen scored on a give-and-go with Hintz just over six minutes later.

The Blues answered 46 seconds later on Parayko’s drive from the top of the circle.

Schwartz tipped in a shot from Parayko just 1:48 into the third. Schwartz has a team-high five goals in the first two rounds.

‘Forget and move on’

Bishop improved to 11-3 when coming off a loss in the playoffs.

“I’ve been pulled, I’ve given up six [goals], it happens,” Bishop said. “That’s the cool thing about the playoffs. You forget and move on.”

Bishop made big saves on Ryan O’Reilly and Oskar Sundqvist in the third period. Bishop used his arm to clear a shot from David Perron that hit the boards and bounced behind him in the second.

“We knew Bishop would be great,” Dallas coach Jim Montgomery said. “He’s been great for us all year and he’s a Vezina [Trophy] finalist because of it. He’s our brick wall back there.”

The Finn leads all rookies in playoff scoring with four goals and three assists.

“We were skating and getting pucks deep,” Hintz said. “We’re confident now, and it’s good.”

The Blues came out flat in the first period and never fully recovered, according to Schwartz.

“Our puck-play wasn’t as sharp as it usually is,” said Schwartz, who had a game-high six shots. “And they took advantage. We did a good job coming back. But that was a lapse we couldn’t have.”

St. Louis interim coach Craig Berube said his team wasted too many good chances. The Blues were 0-for-5 with the man advantage.

“Our power play could have helped us tonight, it didn’t,” Berube said. “That might have made the difference in the game.”