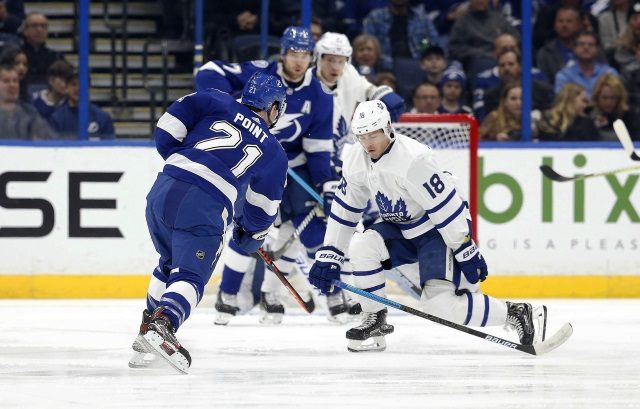 The disappointing first-round playoff exits of the Pittsburgh Penguins, Tampa Bay Lightning, Toronto Maple Leafs, and Washington Capitals have some of their fans calling for changes.

A case can be made for each club to address specific roster weaknesses through the trade market. The Penguins could use an injection of young talent, the Lightning must re-sign or replace three pending free-agent defensemen, the Leafs desperately need a top-two right-shot blueliner while the Capitals could use more speed.

It’s the salary cap, however, that will bring about significant changes for these four Eastern Conference clubs.

The Penguins have the least amount of wiggle room for 2019-20. Cap Friendly indicates they have over $79.7 million invested in 18 players next season. Fortunately, all their core players are under contract. Still, if the cap reaches $83 million as projected, they won’t have much room to re-sign players or bolster their depth.

Penguins general manager Jim Rutherford could move out a couple of high-salaried veterans and replace them with younger, faster, more affordable talent. The Pittsburgh Post-Gazette‘s Jason Mackey last week cited team sources claiming the management team is considering almost all options short of moving Sidney Crosby and Matt Murray. That could include shopping a forward such as Evgeni Malkin or Phil Kessel or a defenseman like Kris Letang.

It’s unlikely Malkin and Letang are going anywhere as they’re still considered part of the Penguins’ core. Kessel, however, was the subject of frequent trade speculation over the last two years. The Pittsburgh Tribune-Review‘s Jonathan Bombulie suggested blueliner Olli Maatta could also become a trade candidate.

The Lightning, meanwhile, have over $73.1 million committed to 16 players. Veteran defenseman Dan Girardi, Braydon Coburn, and Anton Stralman are unrestricted free agents. Center Brayden Point is a restricted free agent due for a big raise following a 92-point campaign.

Lightning GM Julien BriseBois must free up some salary-cap room to sign Point and re-sign or replace those veteran blueliners. The New York Post‘s Larry Brooks expects BriseBois will buy out the final season of aging right wing Ryan Callahan ($5.8 million). He also believes forward J.T. Miller, who’s carrying a $5.25-million salary-cap hit through 2022-23, will be shopped this summer.

Toronto Maple Leafs GM Kyle Dubas also has a restricted free agent star to re-sign in Mitch Marner. Sportsnet’s Nick Kypreos anticipates it could cost the Leafs around $11 million to ink the 21-year-old winger, who’s coming off a 94-point campaign.

With over $74.2 million tied up on 17 players, Marner’s new deal will push the Leafs over next season’s projected cap. That’ll leave nothing to re-sign restricted free agents Kasperi Kapanen and Andreas Johnsson or to re-sign or replace pending UFA blueliners Jake Gardiner and Ron Hainsey.

The Leafs can spend over the cap ceiling by $5.3 million next season by placing permanently sidelined winger Nathan Horton on long-term injury reserve. Nevertheless, Dubas will have to make a cost-cutting deal or two.

Terry Koshan of the Toronto Sun is among several pundits suggesting William Nylander ($6.9 million through 2023-24) could become a trade candidate. Others feel Nazem Kadri ($4.5 million through 2021-22) could be shopped. Aging left wing Patrick Marleau ($6.25 million) has a full no-movement clause and would be a tough sell if he were willing to waive it.

Sportsnet’s Elliotte Friedman isn’t ruling out trading Marner if the two sides fail to reach an agreement by July 1. That’s when the winger becomes eligible to sign an offer sheet from a rival club.

The Capitals, meanwhile, still have plenty of skilled talent to remain a Cup contender next season. Unfortunately, the need to become cap compliant could whittle away at that depth.

With over $72.6 million invested in 16 players and with $1.15 million in bonus overages due to be tacked on, Capitals GM Brian MacLellan could have less than $10 million to work with for next season. With RFA winger Jakub Vrana due for a raise and the need to re-sign winger Brett Connolly, the Washington Post‘s Isabelle Khurshudyan speculates a salaried player or two could be moved this summer.

For these four clubs, there’s simply no getting around the cost-cutting moves. Those decisions will have a significant effect on their rosters next season.