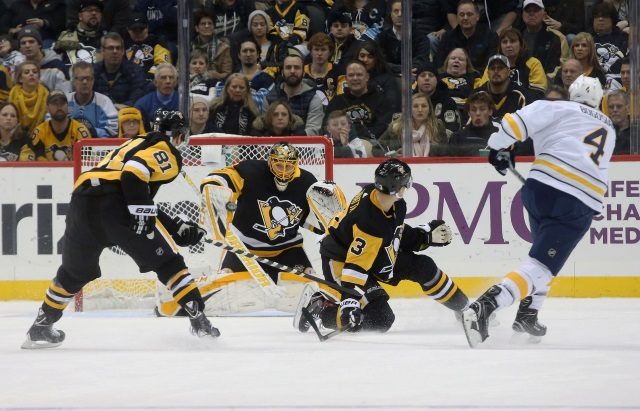 Penguins need to get faster

Jason Mackey of the Pittsburgh Post-Gazette: The Pittsburgh Penguins don’t have the team speed they once did and others are faster now.

They need to change that this offseason, and according to GM Jim Rutherford, play a more “up-tempo, puck-pressure game.”

Rutherford may look to add a ‘swift skater’ or two this offseason.

Teddy Blueger will likely take Matt Cullen‘s spot, meaning Cullen’s latest stint with the Penguins may be coming to an end. The 42-year old Cullen is also deciding if he’s going to retire or not.

Jason Mackey of the Pittsburgh Post-Gazette: (mailbag) If picking one roster player who won’t be back, would guess Phil Kessel.

Don’t think the Penguins salary cap situation will be a huge problem for them. GM Jim Rutherford knows that he needs to some bodies out – Kessel, a defenseman, maybe more. He could clear some space in those deals.

Can’t see the Penguins bringing back Carl Hagelin. They are looking to go a little younger. Don’t see them wanting to bring any players in their 30’s.

A Kessel trade may be more about the salary cap space than about the return. Some of said it won’t be easy to move Kessel.

Don’t think the Penguins will trade Kris Letang or Evgeni Malkin this offseason.

If the Penguins move a defenseman, it could be Olli Maatta.

Penguins most likely on the move

Josh Yohe of the Athletic: Least to most likely on the move this offseason for the Penguins.

The most likely to be traded – Olli Maatta and Tristan Jarry.