Trailing in the second period and in danger of going down 2-0 in the series, Colorado Avalanche coach Jared Bednar put his three top scorers back on a line together and got the results he sought.

Gabriel Landeskog scored the first goal and Mikko Rantanen’s hustle helped create the tiebreaking tally from Tyson Barrie, sending the Avalanche to a 4-3 victory over the San Jose Sharks on Sunday that tied the second-round series at a game apiece.

“In the first period, we didn’t get much going so maybe he wanted to switch a little bit and see if it brings a spark,” Rantanen said. “We got an early goal from Landy and there was no changing back.”

Landeskog, Rantanen and Nathan MacKinnon were reunited early in the second period and helped provide goals on the first and fourth shifts, turning the tide of the series in Colorado’s direction after a 5-2 loss in the opener.

Former Shark Matt Nieto scored in the third period and MacKinnon added an empty-netter to give Colorado its third victory in its past 24 games in San Jose. Philipp Grubauer made 31 saves.

“It’s big for our confidence,” said Barrie, who had a goal and two assists. “This is a tough building to win in. We haven’t had a whole lot of success here. We wanted to come in and at least get a split. We did that.”

Game 3 is Tuesday night in Denver.

The Avalanche turned the game around thanks to their top line that has been so dangerous all year. Landeskog got to the front the net to deflect a point shot from Barrie past Jones for the equalizer midway through the second.

The ice was tilted Colorado’s way after that and the trio helped deliver again a couple of shifts later. Rantanen raced past Marc-Edouard Vlasic to negate an icing and create a scoring chance for Colorado. Jones made a good stop on Landeskog from in close but the puck went out to Barrie at the top of the faceoff circle and he beat Jones with a shot to the top corner to give Colorado a 2-1 lead.

“I just tried to beat the D and run the puck down,” Rantanen said. “Landy gave me the 50-50 puck and they didn’t whistle it down so it was good for us.”

The Sharks appeared to slow up on the play in anticipation of the icing call and that brief hesitation proved costly when the linesman didn’t blow the play dead. 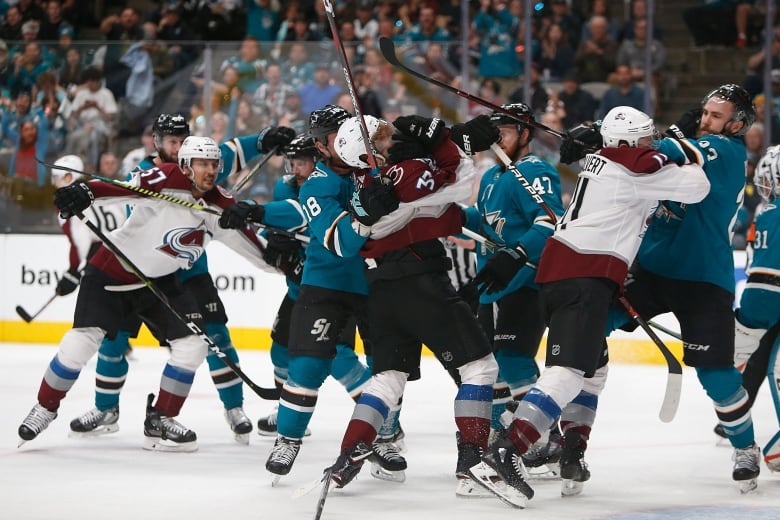 Tempers flared as the Avalanche tied their series with the Sharks. (Lachlan Cunningham/Getty Images)

“Whether I thought it was doesn’t matter,” coach Peter DeBoer said. “The players did and they let up, they relaxed for a minute, it obviously wasn’t, so it’s I guess a lesson, and that is don’t assume anything is in the playoffs, play and make sure.”

The Sharks had a chance to tie it early in the third but Grubauer robbed Logan Couture from the slot with a glove save.

Shortly after, Nieto scored following a scramble in front of Jones after a turnover by Marcus Sorensen to make it 3-1 and give the Avalanche some breathing room.

Burns scored with a wrister from the top circle to make it a one-goal game with 4:34 to play.

But MacKinnon scored an empty-netter with 1:02 to play that made Burns’ power-play goal with 10.9 seconds left moot.

The Sharks got off to a fast start as they looked to build on their 5-2 victory in the series opener. They looked like the quicker team early and appeared to have much more energy than they did Friday night when they were still recovering from a grueling seven-game series in the first round.

That paid off midway through the first when Kane beat rookie Cale Makar to the rebound of Burns’ point shot and knocked it past Grubauer for his first goal since the playoff opener.

The Sharks had plenty of more chances late in the period but were unable to get anything else past Grubauer, who made a brilliant glove save to rob Kevin Labanc in the final minute of the first.

“We should’ve been up two or three after the first,” Couture said. “We had too many good looks not to score a second one and give ourselves a bigger lead, and then they found their game in the second.”