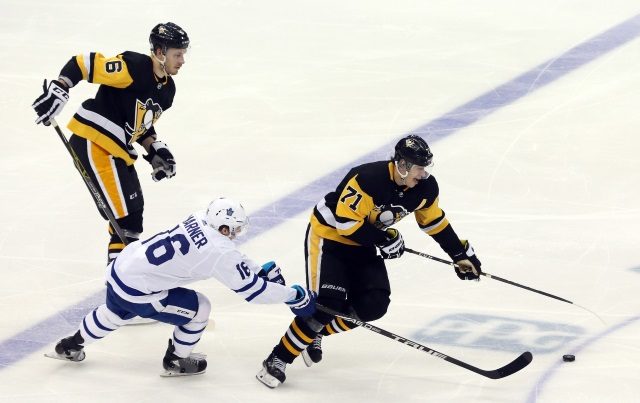 Elliotte Friedman of Sportsnet: As long as Sidney Crosby is playing in Pittsburgh, the Penguins won’t go through a rebuild.

Some teams believe there is something behind the Evgeni Malkin trade rumors. The Penguins may be looking if the idea is feasible or not. Malkin does have a no-movement clause, but would he give a short list of teams? Rangers or Florida? Sources have told Josh Yohe of the Athletic that Mario Lemieux is against the idea of trading Malkin.

The Penguins may consider moving Phil Kessel and teams will call them about Kris Letang.

The Vegas Golden Knights may not have granted the Edmonton Oilers permission yet to speak with Kelly McCrimmon about their GM position. Mark Hunter has interviewed twice. Others interviewed by the Oilers include Mark Hunter, Sean Burke, John Ferguson, Mike Futa, Ross Mahoney, Scott Mellanby and Pat Verbeek. Mike Gillis had a phone interview.

Before Steve Yzerman took over as the Detroit Red Wings GM, then GM Ken Holland talked about a potential Pavel Datsyuk return.

The Buffalo Sabres have interviewed Dave Tippett and Jacques Martin. Swedish coach Rikard Gronborg is also of interest. They could ask the Maple Leafs if they can talk to Sheldon Keefe.

The Sabres and Tampa Bay Lightning had talked about defenseman Rasmus Ristolainen and could revisit talks. Another team that had interest in Ristolainen thinks that the Sabres are asking potential coaches how they could work with him.

The Maple Leafs may want to add Keefe to their coaching staff if they lose one of their assistants – Jim Hiller or D.J. Smith.

Mitch Marner may be asking for Auston Matthews money with the Maple Leafs thinking less than Patrick Kane‘s $10.5 million and would likely want in the Mark Stone/Nikita Kucherov $9.5 million range.

Russian sources thinking it’s the Maple Leafs for Ilya Mikheyev and he’s not deciding between the Leafs and the Vegas Golden Knights.

The Calgary Flames will be signing KHL defenseman Alexander Yelesin.

The Flames don’t seem interested in adding a high draft pick for someone to take James Neal‘s contract.

It won’t be easy for the Winnipeg Jets to re-sign Brandon Tanev. Sounding like Patrik Laine will get a bridge deal and that both sides are thinking long-term for Kyle Connor. Mathieu Perreault could be dangled for cap relief. Nik Ehlers could become trade bait. There have been no talks with pending UFA Tyler Myers.

New York Rangers GM Jeff Gorton is going to be active this offseason – they have cap space and pick – and may not be afraid to offer sheet.

Nicklas Backstrom and Braden Holtby have a year left on their contract and the Washington Capitals may see what they are thinking.

The Vancouver Canucks almost traded for P.K. Subban at the 2016 draft – do look at him this offseason?