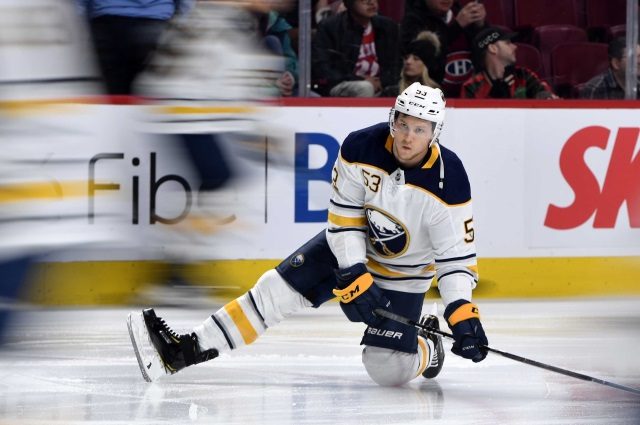 No decision on Pominville yet

Lance Lysowski: Source said last week that the Buffalo Sabres haven’t made a decision on whether or not to attempt to re-sign unrestricted free agent forward Jason Pominville.

They are waiting to until they get a new head coach in place so they’ll have a better idea on where they want to go with regards to their roster for next season.

Lance Lysowski of the Buffalo News: The Buffalo Sabres continue to look for a head coach and the time to re-sign unrestricted free agent winger Jeff Skinner is shrinking.

The 26-year old, 40-goal scorer will hit the open market in July 1st if he isn’t re-signed by the Sabres before then. GM Jason Botterill said at his press conference that they will get him signed.

There will be a number of teams interested in Skinner if he goes to the market. He could get a deal between $7 and $9 million.

The Florida Panthers could be one of the teams interested in Skinner if they lose out on Artemi Panarin. The Panthers do have some bad contract they may need to move and could look to improve on the blue line instead.

Depending on who the Columbus Blue Jackets lose, they could be an interested team. They are believed to want to re-sign Matt Duchene, but if they lose out on Duchene, Panarin, Sergei Bobrovsky, they may look to Skinner.

The New York Islanders will have over $30 million in salary cap space and could use some offensive help.

The New York Rangers are another team with salary cap room. They are also believed to be interested in Panarin.

The Philadelphia Flyers have some cap space but some RFAs that need new deals.

The San Jose Sharks and Pittsburgh Penguins could be dark horses depending on what offseason moves they make, or who they allow to leave via free agency.