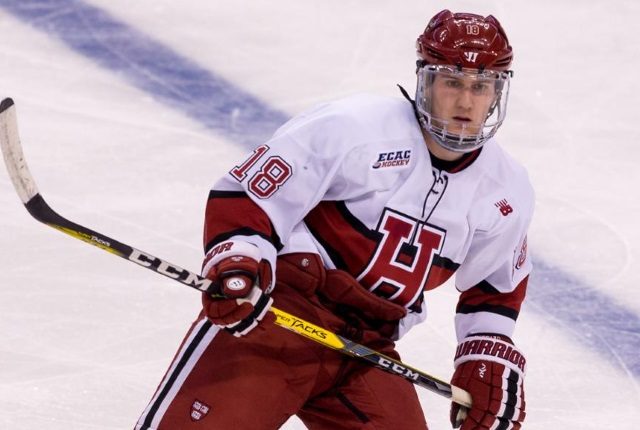 The New York Rangers have acquired the rights to defenseman Adam Fox from the Carolina Hurricanes for 2019 2nd round picks and a conditional 2020 3rd round pick.

Bob McKenzie: The pick would become a second-round pick if Fox plays 30 games next season.

Mike Morreale: “Adam Fox (5-11, 181) was a finalist for the Hobey Baker Award (won by Cale Makar) after scoring 48 points (nine goals, 39 assists) in 33 games for Harvard; averaged 1.45 ppg. as a junior. He was named Ivy League Player of the Year. He and David Quinn will work well together.”

Chris Peters: “Have to think this changes Fox’s plans for next season given the price here. Long rumored that Fox wanted to specifically go to the Rangers. He’d at least have a good shot at making the roster right out of camp.”

Luke DeCock: “The last time the Hurricanes had a top prospect refuse to sign after his college season in a playoff year, they won the Stanley Cup. Jack Johnson would have his name on it.”

Eric Francis: “Like I said when he was packaged up by Calgary, there was never any chance he’d play in Calgary or Carolina, as he had let it be known he was New York bound.”

Isabelle Khurshudyan: “Hurricanes didn’t have a ton of leverage, so this is a good return for them.”

J.D. Burke: “New York Rangers are getting one hell of a player in Adam Fox. Based on the series of NCAA games I’ve tracked this season, he’s at or near the top as a transitional player. Nice little nugget aside from the fact that, you know, he put up a boatload of points.”

Brett Finger: “The Hurricanes get the 37th-overall draft pick in this year’s draft (plus a conditional 3rd next year) for Adam Fox. Carolina now has both the 36th (from Buffalo) and 37th overall picks in this year’s draft. Lots of possibilities with those early 2nd-rounders…”