A desperate and determined Boston Bruins huffed and puffed in the third period of Game 3 in their second-round series against the Columbus Blue Jackets on Tuesday. But they couldn’t blow one more goal past goalie Sergei Bobrovsky.

Oh, the Bruins came close. Boston forward Noel Acciari hit the post early in the final period. His teammate and defenceman Brandon Carlo drifted a shot off the crossbar a few shifts later. But there would be no equalizer on this night. There would be no overtime for the third game in a row in this series.

Instead, the Bruins suffered their first back-to-back losses in their 2019 post-season run. Instead, Boston has found out what the Presidents’ Trophy-winning Tampa Bay Lightning discovered in the opening round: this Blue Jackets team has a mountainous shot-blocking defence and a monster in the crease in goalie Sergei Bobrovsky.

The Russian netminder made 36 saves, including a whopping 15 in the final 20 minutes, to lead Columbus to a 2-1 victory at Nationwide Arena and snatch a 2-1 series lead. The players in front of him blocked 22 more shots, including five from their star defender, Seth Jones.

The Bruins lost by only a goal. Maybe Bobrovsky doesn’t make a huge stop on a Patrice Bergeron redirect off a Torey Krug shot with 61 seconds remaining. Maybe he doesn’t make a magnificent save on Bruins defenceman Charlie McAvoy.

But Boston is in trouble. 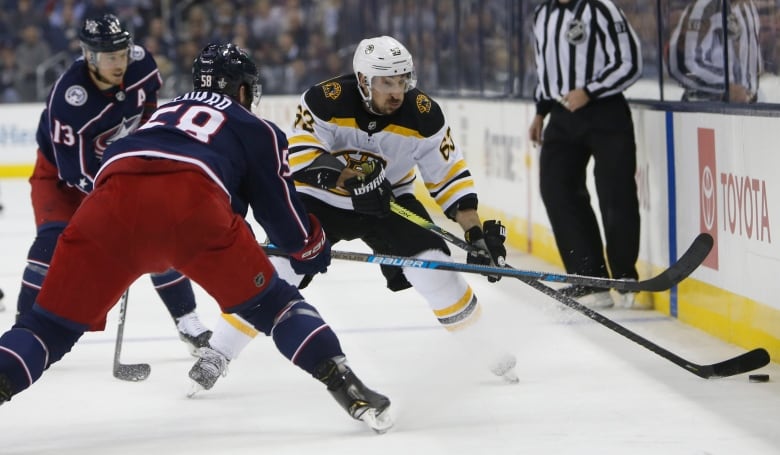 The two days off between Games 2 and 3 in this series were supposed to benefit the Bruins’ older legs and exhausted bodies. While the Blue Jackets enjoyed a nine-day break after their four-game sweep of the Lightning, Boston was back on the ice for the series opener two days after dispatching the Toronto Maple Leafs in a seventh and deciding game a week ago.

But the Bruins did not appear well rested as the Blue Jackets punished them.

Boston’s power play has stopped clicking. So has its big trio of Bergeron, Brad Marchand and David Pastrnak. The Bruins have a wonderful support cast and have relied on the likes of Charlie Coyle, Marcus Johansson and Sean Kuraly to close out the Toronto Maple Leafs in the first round and win the series opener against the Blue Jackets. But it’s time for Bergeron and the big guns to find their groove in Game 4 in Columbus on Thursday.

The Blue Jackets were playing at home in the second round for the first time in franchise history. For the time being, the home of the Ohio State Buckeyes football factory has been turned into a hockey town.

The home team fed off the excitement they have created in Ohio’s state capital. But they resisted the temptation to get too jazzed up. Instead, they played a smart, patient opening 20 minutes and were rewarded with a 1-0 lead late in the first period. 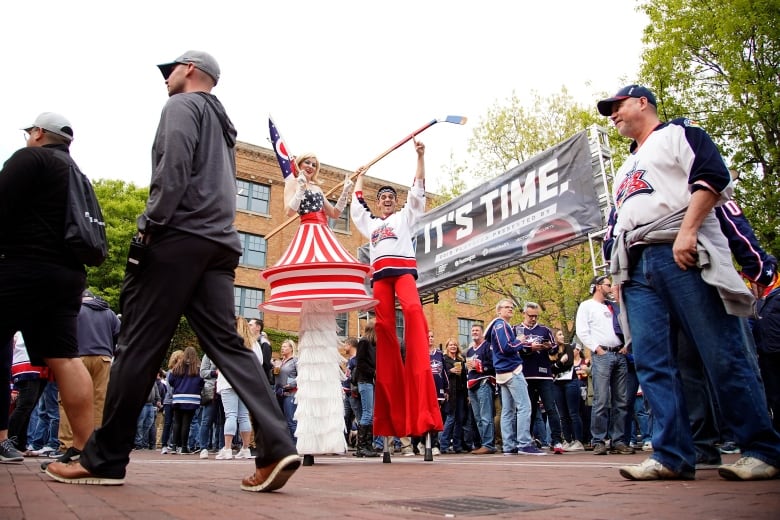 Jackets fans in Columbus are enjoying their team’s run in this post-season. (Kirk Irwin/Getty Images)

It was Canadian national women’s team star Brianne Jenner’s younger brother, Boone, who scored off the rush when his shot from in close changed direction off the out-stretched stick of Bruins defenceman Connor Clifton.

Columbus expanded its lead to 2-0 midway through with a power-play goal from Matt Duchene. His rebound marker was similar to the goal he deposited in Game 2 with the man-advantage early in double overtime on Saturday.

Jake DeBrusk pulled Boston to within a goal in the final minute of the second period with a shot that barely snuck over the goal line. But that was it. The Blue Jackets turned the game over to Bobrovsky and their shot-blockers in the closing period.

That was enough. The Bruins could not find any late-game magic. No, the only thing they found was a team that may be young and inexperienced but knows how to play determined and hard-hitting playoff hockey.

It’s funny that after the Lightning was eliminated, contenders like the Maple Leafs, the Bruins and Capitals were licking their chops because they thought they had a clear path to the Stanley Cup final.

If the Bruins don’t get their act together this week they will soon join Toronto and Washington on the sidelines.