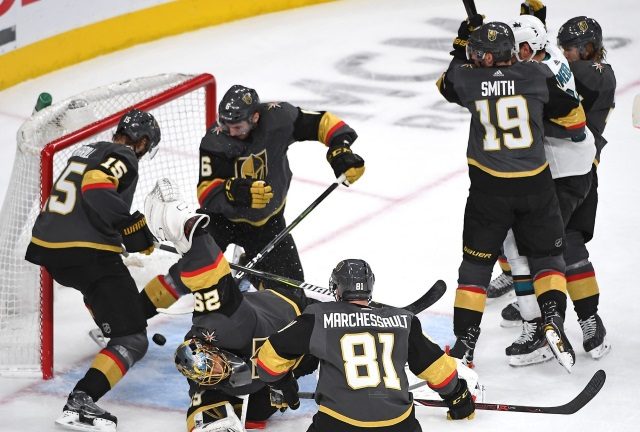 Jesse Granger of The Athletic: Looking at the Vegas Golden Knights from players who aren’t going anywhere to players who won’t be back.

Big name trade possibilities – William Karlsson (doubtful but if a new deal can’t be reached) and Colin Miller (has value to a team like the Maple Leafs).

The big decision – Erik Haula has a year left on his contract before becoming a UFA but they likely won’t get a fair return given his leg injury last season.

Most likely to be traded – Cody Eakin has a year left on his deal at a $3.85 million cap hit. Could move to clear cap space for picks, prospects or to move up in the draft. Ryan Reaves is a fan favorite but a $2.775 million cap hit. Can they move Nick Holden‘s contract?

Justin Emerson of the Las Vegas Sun: Looking at who the Vegas Golden Knights won’t move and who they might.

Career highs last season for Eakin with 22 goals and 41 points. The return of Haula could bump him down to the fourth line. Could use the cap savings.

The right-handed Miller has three years left at $3.875 million. Some teams may prefer expiring contracts but others may like the stability.

It’s likely that Reaves returns but the Golden Knights may need to move salary.

Pending UFA Brandon Pirri will likely sign elsewhere. Ryan Carpenter could come back but he may get into less games and may look elsewhere. Deryk Engelland would love to be back.