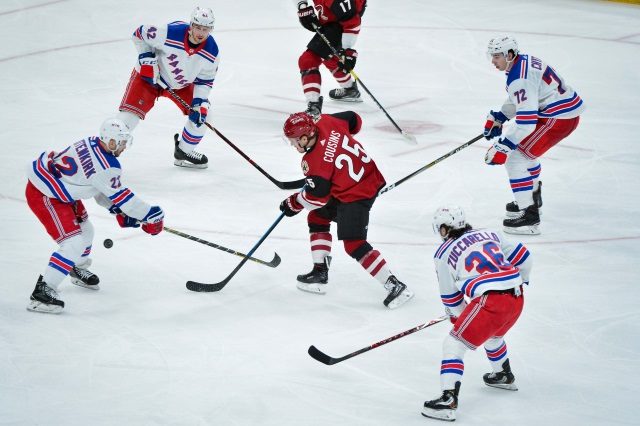 Goldobin plans on staying with the Canucks

Rick Dhaliwal: The agent for Vancouver Canucks forward Nikolay Goldobin said that he didn’t sign with a KHL and that he plans on going back to the Canucks.

Aaron Portzline: The Columbus Blue Jackets are one of the teams that are interested in Finnish free agent right-handed defenseman Oliwer Kaski.

The 23-year old played two seasons at Western Michigan and has spent the past three years playing in Finland.

Hurricanes thought they would have been able to sign Fox

Pierre LeBrun: Carolina Hurricanes GM Don Waddell and team owner Tom Dundon had multiple talks with Adam Fox to try and convince him to sign with them.

That obviously didn’t happen and the Rangers were basically the only team the Hurricanes could trade him too. They got a pretty good return considering that.

Chip Alexander: Waddell had been pretty confident that he could get Fox signed after the trade was initially made with the Calgary Flames, and more recently when Fox said that he could return to school for another year.

Larry Brooks of the NY Post: The New York Rangers could have waited until August 16th, 2020 to attempt sign Adam Fox as a free agent instead of giving up a 2nd round pick and a conditional 3rd round pick.

They didn’t want to take the chance as GM Jeff Gorton said that a lot can change in 12 to 16 months.

The Rangers will have a decision to make with regards to the future of Kevin Shattenkirk who has two years left at a $6.8 million salary cap hit. The Rangers will look to move him and will have to likely retain 50 percent of his cap hit.

The Rangers could also look into trading for Winnipeg Jets defenseman Jacob Trouba.

If the Rangers can’t trade Shattenkirk, they could look at buying him out.

Fellow defenseman Brendan Smith could also be a buyout candidate.

“It’s no secret we need to improve our defense. It was not good enough for us to be what we want to be,” Gorton said. “It’s something we recognize and we’re acting on.

Maple Leafs sign training camp holdout Rasmus Sandin to 2-year contract
NHL Rumors: Blues, Flames, Maple Leafs, Senators
NHLers reflect on another will summer of goalie musical chairs: ‘It’s crazy’
‘Business as usual’ for Sutters in Calgary
Toronto out and Detroit in? Teams most likely to rise and fall in the playoff race