TeuvoTeravainen scored a quick goal, and moments later, so did Greg McKegg. Just that quickly, the Carolina Hurricanes chased New York’s goalie out of the game — and the Islanders right out of the playoffs.

Carolina earned a second-round sweep of the Islanders on Friday night, beating them 5-2 after Teravainen and McKegg scored 66 seconds apart in the second period.

Teravainen and Sebastian Aho each finished with a goal and an assist, captain Justin Williams and rookie star AndreiSvechnikov each added insurance goals, and goalie Curtis McElhinney made 26 saves in his second career playoff start.

The Hurricanes — who went a decade between playoff berths — earned the first four-game sweep in franchise history and have reached the Eastern Conference final in each of their last four post-season appearances since 2002. They’re also unbeaten in five home playoff games.

“Imposing your will on a team and giving them doubt is the key to winning a series, whenever that may be,” Williams said. “We pushed and we pushed, we got a couple goals, we got a good lead, and that’s how you win a series. You tell a team it’s too hard for them, and it was.”

The Carolina Hurricanes ended the New York Islanders’ season with a 5-2 win in Game 4 at home. 2:23

Now the Hurricanes — after winning six straight and eight of nine — have some time to heal before they face the Columbus-Boston winner.

“I don’t have a favourite,” defenceman Justin Faulk said. “We’re sitting here, we’re ready for whoever we’ve got next.”

Mathew Barzal scored a power-play goal and Brock Nelson added a late goal for the Islanders, who managed just five goals in the series and were swept for the first time since the Rangers did it in the first round in 1994.

Coach Barry Trotz kept the identity of his starting goalie a secret until warmups — when Robin Lehner led them onto the ice for the fourth straight game in the series.

Trotz pulled him in favour of backup Thomas Greiss after the bang-bang goals by Teravainen and McKegg early in the second period.

“We just got punched in the nose, and I was looking for a spark,” Trotz said. “I knew that goals had been pretty hard to come by in the series. … We just couldn’t get close enough in the end.”

Teravainen put the Hurricanes ahead to stay after some slick passes from Aho and Warren Foegele set up his sixth goal of the post-season. And McKegg chased Lehner when the goalie couldn’t keep hold of the rebound of Brett Pesce’s shot and the Carolina rookie stuffed it in for his first playoff goal. 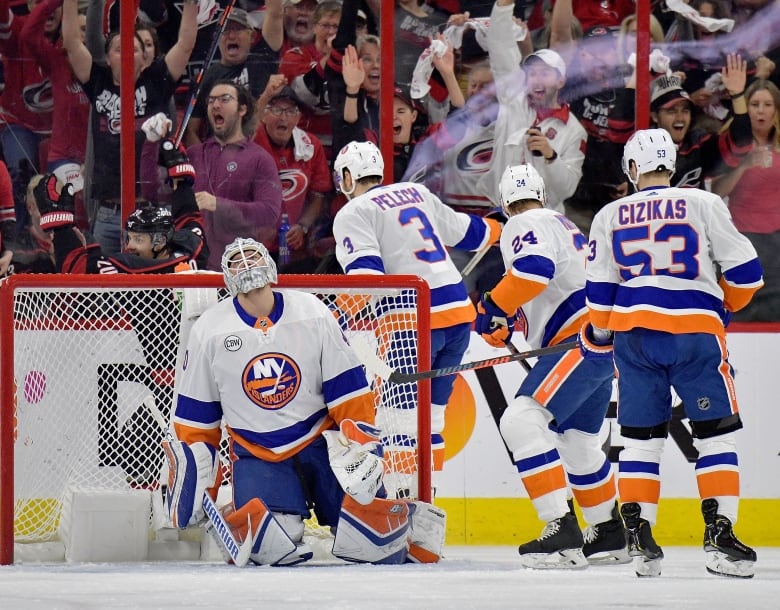 Islanders goaltender Robin Lehner reacts after Carolina’s Sebastian Aho scored in the first period of Game 4 on Friday. Lehner was pulled in the second period as his team was eliminated in a four-game sweep. (Grant Halverson/Getty Images)

Greiss wasn’t much better against the high-energy Hurricanes, with Williams scoring their third goal of the period off a give-and-go from Nino Niederreiter at 8:51 and Svechnikov riling up the rowdy Caniacs with his goal with 4:47 left.

Lehner and Greiss each finished with eight saves for the Islanders. Their counterpart — McElhinney — wouldn’t let them make this a game again, stopping Josh Bailey from point-blank range with about 10 1/2 minutes remaining. 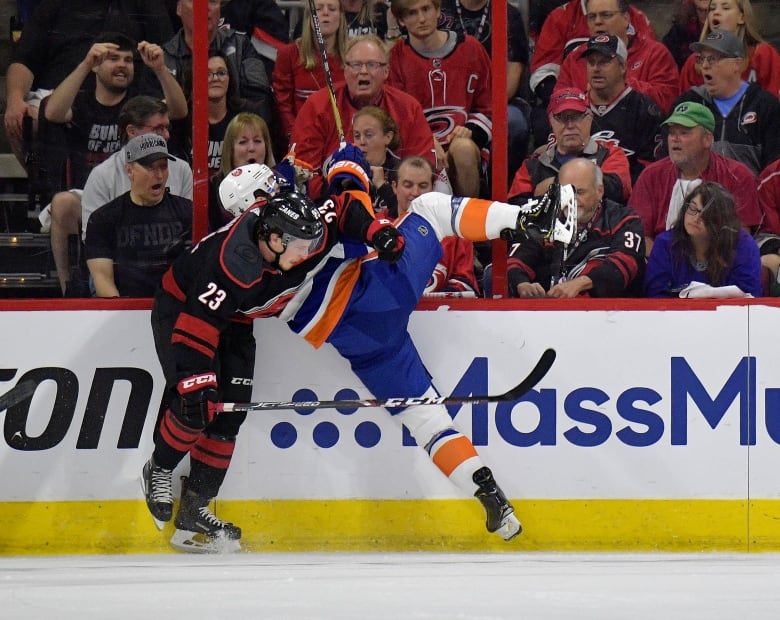 With elimination looming over his team, Trotz declared this game as a Game 7 and they approached it with the urgency of one, taking full advantage of a high-sticking penalty to Svechnikov 73 seconds in. Barzal slipped behind Jaccob Slavin and poked the rebound of Devon Towes’ shot past McElhinney for his second goal in three games.

From there, though, it was all Hurricanes — who got some help from an Islanders defenceman to end their lengthy power-play drought.

Carolina was 3 of 34 with the man advantage during this post-season and had no power-play goals since Game 3 of the Washington series, but when Adam Pelech accidentally shovelled the puck into his own net during a scrum in front of Lehner — for a goal credited to Aho — that dry spell was over.

Oilers’ Koskinen Believed to Have Deal Overseas for 2022-23 Season
Down 3-0, ‘it looks bleak’ for top-seeded Panthers
3 Oilers Who Can Secure a Future With Team in Series vs. Flames
3 Takeaways From Blues’ 3-2 Overtime Loss to Avalanche in Game 1
Dave Poulin: Killer instinct takes time. But in the NHL playoffs, you can’t win without it