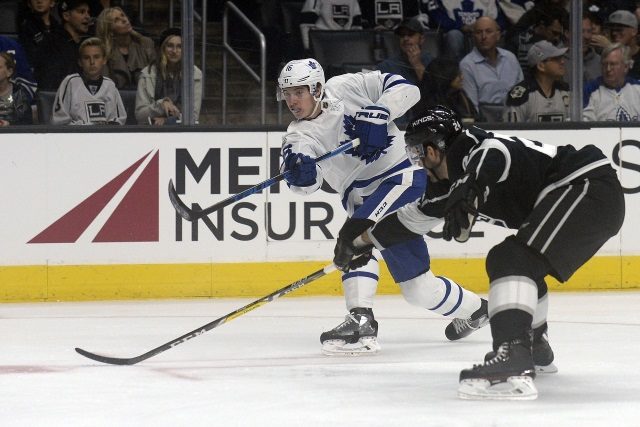 Jonas Siegel of The Athletic:  Mitch Marner contract talk presents as a contentious topic. Marner possesses much leverage tallying 94 points last season and an expectation of even high next year. Kyle Dubas knows this and playmakers like him are rare. Marner established himself as an elite penalty killer and played over 20 minutes a night.

Mitch Marner turns just 22 next week and this is priority one for the Toronto Maple Leafs. The expectation is a deal gets done but is a matter of the term and dollars.

Then, there is Mike Babcock. Will Babcock evolve to coach this team forward or will they continue to sputter around? If Kyle Dubas thinks the latter is likely, he may still fire Babcock. If not, Babcock coaches next season in Toronto. The second scenario is the most likely. The Toronto coach must trust his youth. It has to happen — from forwards to defensemen alike. Do the assistants get changed?

Kevin McGran of The Star:  Mitch Marner keys the Toronto forward attack and his deal is the last piece. Marner must grow still as a player but he took clear steps defensively and offensively last season. Does he take a longer deal for more AAV or a bridge deal for less? Does Toronto have faith in Mitch Marner to go to a longer term?

How to fix the Toronto defense?

Luke Fox of Sportsnet:  Everyone knows the Toronto defense needs fixing — they allowed 33.1 shots per game last year (24th in the NHL). In the playoffs, they were the second worst only to Calgary in shots allowed per 60. Jake Gardiner and Ron Hainsey are free agents and could easily leave. So, what is left?

Morgan Rielly and Jake Muzzin played well and Travis Dermott expects to improve. The Toronto Marlies’ blueline offers some encouraging news as three of their prospects could easily play for the big club sometime next year. Rasmus Sandin is the best of their prospects from the Marlies and could step right in.

Dubas won’t be able to plunge too far into free agency as upper tiered players like Erik Karlsson, Alex Edler, and Tyler Myers. Perhaps Anton Stralman in the second tier could be had at a reasonable price.

There is two tiers for the trade market if the Maple Leafs.