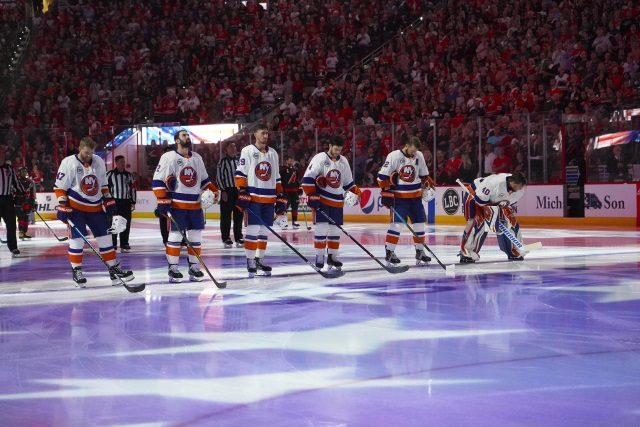 To re-sign or not to re-sign: Anders Lee, Jordan Eberle and Brock Nelson are all pending unrestricted free agents for the Islanders.

The sticking point for Eberle could be term.

Shouldn’t be a surprise if the Islanders bring Valtteri Filppula back on a one-year deal.

Cement the goaltending – Robin Lehner is a pending UFA who will be looking for a raise from the $1.5 million he made last year. Thomas Greiss has a year left on his deal. Top prospect Ilya Sorokin could come to North America.

If Sorokin makes the Islanders, they could look to trade Greiss.

A wild card move would be going after pending UFA Sergei Bobrovsky.

Dabble in free agency? You don’t make much on GM Lou Lamoriello’s plans. After re-signing some of the own free agents, they should have the salary cap space to add a defenseman and maybe take a run at Artemi Panarin. Matt Duchene could be an option.

The Islanders could have cap space to burn

The Islanders could have upwards of $34 million in salary cap space to re-sign their own and other pending free agents.

GM Lou Lamoriello could get into a bidding war with the New York Rangers and Florida Panthers for Artemi Panarin.