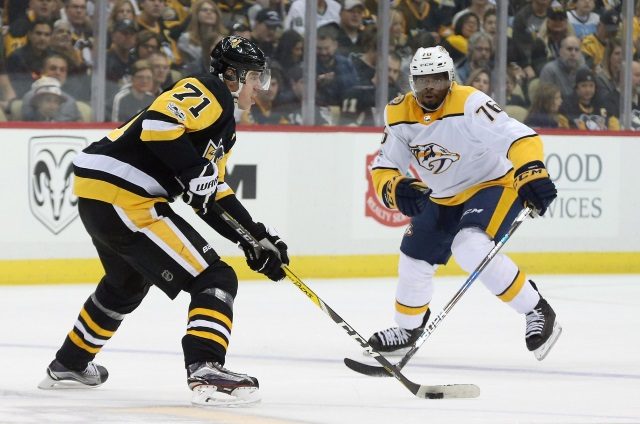 Igor Eronko: Evgeni Malkin to @galkevich32: “I’m used to the talks I’m get traded so it doesn’t get me nervous. Now I’m in the team Russia and I’ll try to prove I’m good. I had a bad season and I’m going to get me out of the pit. Sometimes criticism is justified. This time it’s probably justified.”

Would a Penguins – Predators trade work?

Sean Tierny: Elliotte Friedman suggested on his 31 Thoughts Podcast that the Evgeni Malkin trade rumors may have some heat this time around.

Jeff Marek thinks that the Nashville Predators could be a fit, especially if they send defenseman P.K. Subban to Pittsburgh.

Would a Flyers – Predators trade work?

Sam Carchidi of the Philadelphia Inquirer: There is some speculation that Nashville Predators defenseman P.K. Subban could be available.

The right-handed defenseman would lineup nicely with Philadelphia Flyers defenseman Ivan Provorov. Subban would be a nice complement for the Flyers young defensive group.

The Predators would likely be looking for some scoring help if they look to trade one of their defensemen.

Flyers GM Chuck Fletcher and Predators GM David Poile have a close relationship, have known each other for 47 years, and worked out the Wayne Simmonds at the trade deadline.

Predators coach Peter Laviolette has also coached for the Flyers and is familiar with some players, including winger Jakub Voracek.

The Predators may also want a defenseman in a deal and the Flyers could make Robert Hagg available.

The Flyers could also use a second-line center. Would Toronto Maple Leafs Nazem Kadri be a trade option?

When the Penguins have an emergency, they call on someone from N.S. It’s not who you think
Can money bring women’s professional hockey together?
Connor Bedard’s NHL future looms — but his focus is still on Regina
Kraken Can Benefit from Matty Beniers Missing All-Star Game
Morrissey, Scheifele lead Jets’ rally in 4-2 win over Blues