In order to succeed in the Stanley Cup playoffs a team needs good health, remarkable goaltending and a fortuitous bounce or two.

The Boston Bruins checked all those boxes in their series-clinching 3-0 victory in Game 6 in Columbus against the Blue Jackets on Monday evening.

First and foremost, Boston goalie Tuukka Rask was brilliant. He silenced the cannon that goes off after every Blue Jackets goal at Nationwide Arena. Rask made 39 saves for his sixth career post-season shutout. The Finn closed out Columbus with three wins in a row and a remarkable .962 save percentage in those three outings, having stopped 101 of 105 shots.

He had a little luck on his side. Blue Jackets Pierre-Luc Dubois, Dean Kukan, Josh Anderson and Zach Werenski each hit the crossbar behind Rask in the finale.

But the big matter that benefited Boston and angered the Blue Jackets and their volatile coach John Tortorella was Bruins talented young defenceman Charlie McAvoy got away with a dirty head check. Late in the second period, as Anderson was pushing his way into the Bruins end and being hounded by Boston captain Zdeno Chara, McAvoy skated into the fray and his shoulder hit Anderson squarely in the jaw.

Boston Bruins’ Charlie McAvoy escapes with a minor penalty after levelling Columbus Blue Jackets’ Josh Anderson with a hit to the head late in the second period of Game 6. 1:06

Referee Kelly Anderson had a choice in the bang-bang play: either penalize McAvoy with a two-minute minor for an illegal check to the head or give him a five-minute match penalty that would have resulted in a game misconduct for the Bruins blueliner.

There is no four-minute or simply major penalty for a hit to the head in the NHL rule book. Therefore, Sutherland decided on the lesser of two evils.

And do you blame him, considering the way commissioner Gary Bettman and his office came down on the referees Dan O’Halloran and Eric Furlatt for the blown call in Game 7 of the San Jose Sharks-Vegas Golden Knights series?

If you need a refresher, the Sharks were awarded a five-minute major after San Jose centre Joe Pavelski fell awkwardly and hit his head after being shoved by Vegas forward Cody Eakin. The Sharks scored four times during the five-minute man-advantage situation and eventually won the clincher in overtime.

O’Halloran and Furlatt were not promoted to the second round and, according to Golden Knights owner Bill Foley, the league apologized to him for the muffed call.

McAvoy likely will miss a game due to suspension when the Bruins open their East final series against the Carolina Hurricanes later this week.

In the handshake line afterward, McAvoy made up with Anderson, who appeared fine with his opponent’s gesture. 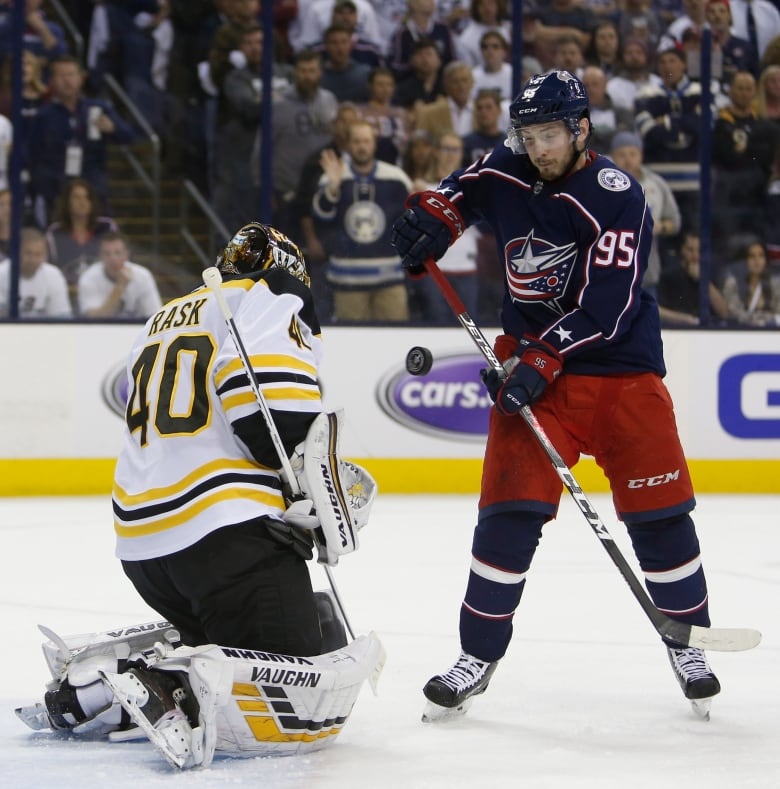 Boston’s Tuukka Rask makes one of his 39 saves in a 3-0 series-clinching win on Monday. (Jay LaPrete/Associated Press)

But even if there would have been a five-minute major and game misconduct levied to McAvoy, it likely would not have mattered. The Blue Jackets lacked intensity and desperation in their game and their power play continued to abandon them, going 0-for-4 on Monday.

The experienced Bruins had the perfect approach. They were patient and waited for their opportunities. They didn’t even flinch when Sean Kuraly’s goal midway through the first period was wiped out due to goalie interference on Joakim Nordstrom.

The game’s first goal didn’t arrive until the 12:13 mark in the second period. Again, a fortuitous bounce for the Bruins when Jake DeBrusk’s shot off the crossbar bounded to Boston veteran David Krejci who had a full head of steam and leaned into a drive that beat Columbus goalie Sergei Bobrovsky low on his blocker side.

The Blue Jackets can be proud of their massive first-round sweep of the Presidents’ Trophy-winning Tampa Bay Lightning. But now an interesting offseason begins. Bobrovsky, Artemi Panarin, Matt Duchene and Ryan Dzingel are unrestricted free agents. There are reports Blue Jackets president John Davidson is about to take the same position with the New York Rangers.

Meanwhile, Tortorella was wrong on two accounts during the 48 hours between Games 5 and 6. First, he remarked that his club would return to Boston for Game 7. Second, he said his team “put a dent” in Rask after scoring three times on the Bruins goalie in the third period of Game 5.

Rask made sure Tortorella was off the mark. Now the Bruins skate on to their third conference final in nine seasons.