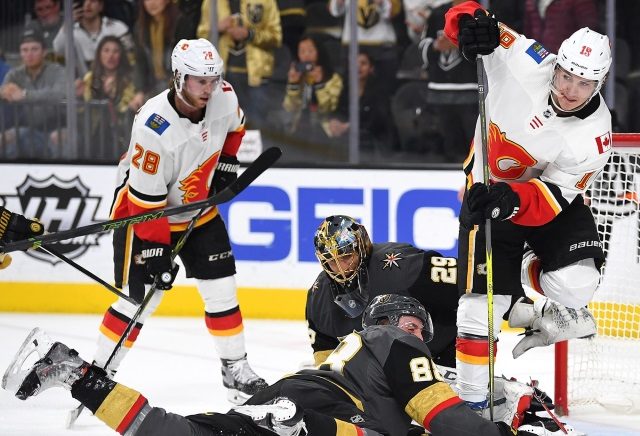 The Calgary Flames, Nashville Predators, Vegas Golden Knights, and Winnipeg Jets entered the 2019 NHL playoffs as Stanley Cup hopefuls. Instead, they were eliminated from the opening round.

Over the offseason, their respective general managers face the difficult prospect of maintaining contending rosters with limited salary-cap space.

Coming off a 34-goal, 77-point performance, the 21-year-old Tkachuk could become the Flames’ highest-paid player. Even if he accepts less than market value (and that seems unlikely), his new contract will quickly eat up most of their cap room.

The Flames must also address their lack of scoring depth at right wing. General manager Brad Treliving came close to acquiring Jason Zucker from the Minnesota Wild at the trade deadline and could revisit that option this summer.

The Hockey News‘ Brian Costello suggested a swap of bad contracts by sending Neal to the Buffalo Sabres for Kyle Okposo. That move, however, won’t resolve the Flames’ cap crunch.

A popgun offense was the Predators’ undoing in the 2019 playoffs. Their early postseason exit didn’t sit well with GM David Poile, who’s promising changes this summer.

With over $76.8 million committed to 20 players, Poile lacks sufficient cap room to bolster his scoring punch. He could be forced to draw upon his blueline depth for trade bait.

The Tennessean‘s Paul Skrbina wondered if P.K. Subban could become a trade candidate. The 29-year-old defenseman is the Predators’ highest-paid player ($9.5 million per season) and lacks no-trade protection. He would attract considerable interest in the trade market and would fetch a return that addresses the Preds’ scoring needs.

The Vegas Golden Knights have over $82.3 million tied up in 17 players. $9.5 million of it is invested in right wing Mark Stone‘s eight-year contract extension, signed soon after he was acquired at the trade deadline.  With center William Karlsson a pending RFA with salary-arbitration rights, they must clear sufficient cap room to re-sign him.

Justin Emerson of the Las Vegas Sun speculates center Cody Eakin ($3.85 million through 2019-20) and defenseman Colin Miller ($3.87 million through 2020-21) are likely trade options. They lack no-trade clauses and have value in the trade market.

Eakin is a solid checking-line forward with a good scoring touch. Given the market for right-shot defensemen, they shouldn’t have difficult drumming up interest in Miller.

The Jets must re-sign restricted free agent forwards Patrik Laine and Kyle Connor. While they have over $55 million tied up in 12 players, new contracts for Laine and Connor could push that to $70 million, leaving little room for other signings or additions.

Defenseman Jacob Trouba is also a restricted free agent. He’s a year away from UFA status and possesses arbitration rights this summer. Given his contentious contract negotiation history, the Jets could trade him rather than risk losing him next summer for nothing.

Even if Trouba gets traded, Jets GM Kevin Cheveldayoff must find sufficient room to fill out the remainder of his roster once Laine and Connor are signed.

Mike McIntyre of the Winnipeg Free Press observed there were some issues and divisions within the Jets’ dressing room. Those could provide additional incentive for Cheveldayoff to ship out a salaried player or two.