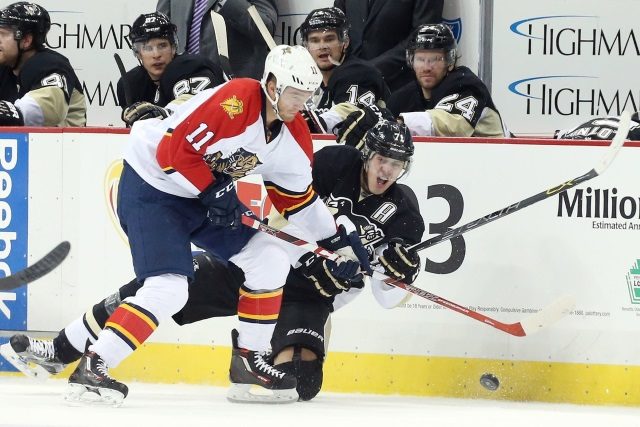 Dan Kingerski of Pittsburgh Hockey Now: Sources from around the league and some that are close to the Pittsburgh Penguins front office said that the Evgeni Malkin trade speculation is true. Malkin does hold a no-movement clause.

Some sources are saying the Florida Panthers are one of the teams that are interested.

The Panthers are looking to add some star power and acquiring Malkin would do that. It would also serve as an extra incentive to hopefully lure pending free agent Artemi Panarin.

Penguins coaches, management and Malkin himself weren’t happy with how his season rolled out.

The Penguins are considering their options with Malkin, as well as others, and how far they may want to take potential changes.

It is believed that if the Penguins were to trade Malkin they would want a high scoring forward, a first round pick, and a prospect.

Sources mention Panthers 25-year old winger Jonathan Huberdeau, though it’s not known if either side brought up Huberdeau’s name.

On the prospect side of things, the Panthers have defenseman Max Gildon and forward Aleksi Heponiemi.

Maatta available and he was involved in, in-season trade talks

Dan Kingerski: Had been told that the Anaheim Ducks and Los Angeles Kings trades with the Penguins during the season had Maatta’s named involve at some level. He obviously wasn’t included in the final deals.

Changes coming for the Penguins

@Prospects_Watch: Elliotte Friedman said on this 31 Thoughts podcast that the Penguins are looking to make some big changes and that Phil Kessel will be traded regardless.

They expect to get offers for defenseman Kris Letang, but can’t see them trading him, but he does have a lot of trade value.

Friedman also thinks there is something to the Evgeni Malkin trade rumors.

@Prospects_Watch: Friedman adds that maybe the Penguins put the Malkin trade rumors out there to rattle his cage.

Friedman says that the Florida Panthers and New York Rangers might be two teams interested in Malkin.