Maroon slammed the puck in after Robert Thomas skated in on Ben Bishop from the right wing. It was the second game-winning goal of the series for the 31-year-old St. Louis native.

Vince Dunn also scored for St. Louis, which will face the winner of the San Jose-Colorado series in the conference final.

Ben Bishop made 52 saves and Mats Zuccarello scored for Dallas, which dropped to 5-8 in Game 7s in franchise history.

It marked the first time in NHL history that three playoff series were decided in overtime in Game 7 in the same year. San Jose eliminated Vegas and Carolina beat Washington in the first round.

St. Louis, which improved to 9-8 in Game 7s, outshot Dallas 54-30, including 41-16 in regulation. But Bishop was terrific against his first NHL team, keeping the Stars in the game with a handful of big-time stops in regulation and the overtimes.

The Blues jumped in front when Dunn converted a shot from the point 13:30 into the first period. It was his first career playoff goal.

Zuccarello then jumped on a fortunate deflection for Dallas, tying it at 1 at 15:55. A clearing attempt by St. Louis forward David Perron hit referee Marc Joannette and bounced right into the slot. Binnington was looking in the other direction and never saw Zuccarello’s shot. 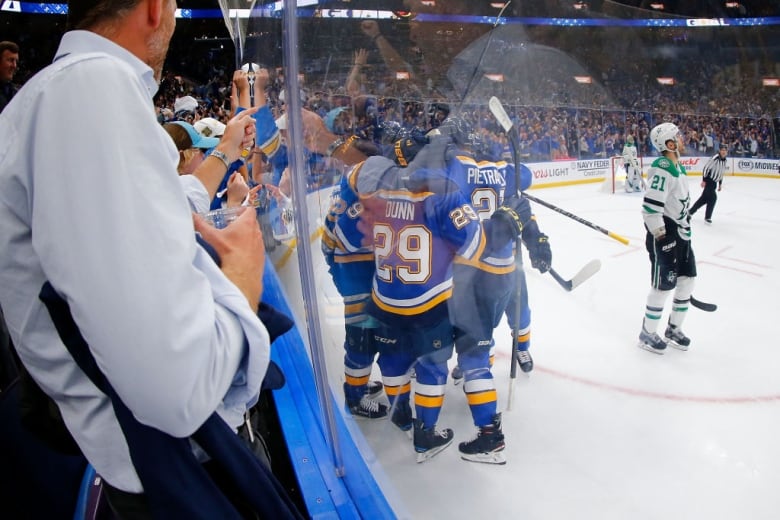 Members of the St. Louis Blues celebrate after scoring a goal against the Dallas Stars in Game 7 on Tuesday night. (Dilip Vishwanat/Getty Images)

Bishop, who took a drive off the collarbone in the third period of Game 6, posted shutouts in his two previous Game 7 appearances, both with the Tampa Bay Lightning. He stopped 18 shots in the second period while the Stars managed just one shot on goal.

Dallas killed off two penalties in a four-minute span midway through the second.

Stars rookie Roope Hintz just missed on a wraparound in the closing minute of regulation.

Binnington turned in several impressive saves in the first period. He stopped Radek Faksa on a breakaway and also recorded a glove save on a shot by John Klingberg.

St. Louis outshot Dallas 27-2 from the start of the second period until 5:16 left in the third.