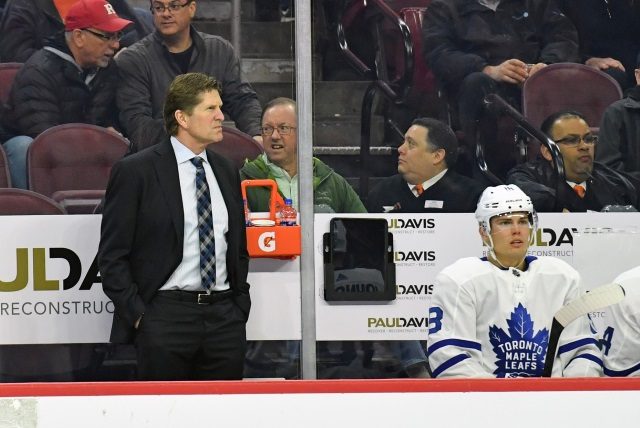 Frank Seravalli of TSN: There was some speculation about the potential of Mike Babcock joining Ken Holland in Edmonton.

“We’re all in on Mike and Mike is all in on us,” Dubas told TSN’s Bob McKenzie. “We’ve had productive management meetings as an organization and Mike and I have had some really good meetings as well since the season ended. It’s our very strong belief that Mike is the one to lead us.”

Pierre LeBrun: Babcock being back with the Maple Leafs was the expected decision, but until Dubas commented on it, there would be the speculation.

Ozhiganov heading back to the KHL

Jonas Siegel: Maple Leafs free agent defenseman Igor Ozhiganov has decided to return to the KHL for next season.

Igor Eronko: Ozhiganov will be signing with Kazan Ak Bars.

Options behind the bench and roster needs for the Oilers

Frank Seravalli of TSN: Edmonton Oilers GM Ken Holland will likely be looking for a veteran coach and could look at Dave Tippett and Todd Nelson.

The Oilers need to find some skilled wingers to play beside Connor McDavid and Leon Draisaitl.

They also could use a top, right-handed defenseman that can play on the power play.

Will Holland be able to find a team that would take on Milan Lucic, and one that he’d be okay with going to as he has a full no-movement clause?

Mikko Koskinen is under contract for another three years at $4.5 million and there aren’t many inside or outside the Oilers that view his as a No. 1 goalie.

Jim Matheson: Holland was telling friends that he was blown away by the Oilers offer, which is believed to be for five years at $5 million a season.

Holland’s friends knew that he still wanted to be a GM and was ready to move away from that at 63-years old.

John Shannon: Holland would have made $3 million a season for the next three years if he had stayed with the Red Wings.