Captain Joe Pavelski was getting staples put into his bloody head when the San Jose Sharks staged an epic comeback in Game 7 of the opening round against Vegas.

Now that the Sharks have been forced into another ultimate game after missing a chance to eliminate Colorado in an overtime loss on the road, they are hopeful of getting their leader back on the ice for the first time since then.

Perhaps the biggest question heading into Game 7 at the Shark Tank on Wednesday night is whether Pavelski will be healthy enough to make a dramatic return against the Avalanche. Coach Peter DeBoer said that will happen as soon as doctors give him the okay.

“I’m not hiding anything,” DeBoer said Tuesday. “He’s day-to-day. He’s getting better every day. We’re going to make a decision on game days whether he’ll be available or not.”

The winner of the game advances to play the winner of Tuesday night’s Game 7 between Dallas and St Louis.

Pavelski’s injury happened midway through the third period in Game 7 against Vegas on April 23 with San Jose trailing 3-0. He was cross-checked by Cody Eakin after a faceoff and then bumped by Paul Stastny before falling awkwardly to the ice head first. The impact of Pavelski’s helmet slamming the ice knocked him out briefly and caused him to bleed from his head.

A dazed Pavelski was helped off the ice by his teammates and then had eight staples put in his head to stop the bleeding. While that was going on, his teammates scored four power-play goals during the major penalty to Eakin that even Pavelski acknowledged was not warranted. 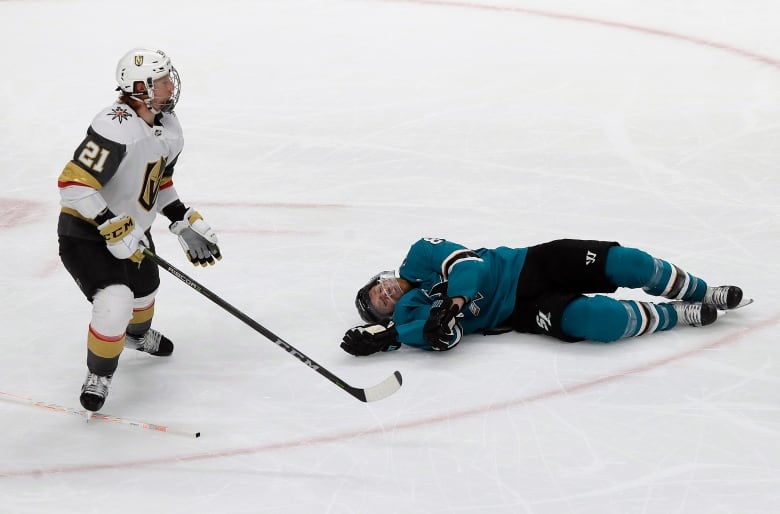 San Jose ultimately won the game on Barclay Goodrow’s overtime goal to advance to the second round. Pavelski was unable even to travel to Colorado for Games 3 and 4 but got back on the ice while his teammates were away last week. He made an emotional appearance at the Shark Tank during the third period of Game 5 to fire up the crowd and traveled to Denver for Game 6 where he took part in the morning skate.

“It still really is day-to-day,” Pavelski said before Game 6. “Wish I had a set-in-stone answer — go here, do this and be ready. We’re taking everything into play.”

No matter what happens with Pavelski, the Sharks will need better performances from several of their other forwards who have been mostly invisible this series. San Jose was supposed to have the better depth up front but that hasn’t been the case so far.

Joe Thornton and Kevin Labanc have gone five straight games without a point, Evander Kane and Marcus Sorensen haven’t recorded a point for four straight games and the fourth line has generated almost no offense.

Colorado has six forwards with at least two goals this series, including secondary options like J.T. Compher, Tyson Jost, Colin Wilson and Matt Nieto. The Sharks have just three with Couture’s three goals all coming in a Game 3 win, Tomas Hertl’s two coming in a Game 5 victory and Timo Meier scoring one of his two into an empty net.

Compher scored twice in regulation in Game 6 and assisted on Jost’s goal as well as the Avalanche managed to get the game into overtime despite its top line of Nathan MacKinnon, Gabriel Landeskog and Mikko Rantanen being on the ice for all three San Jose goals in regulation.

“They’ve been unbelievable all playoffs, all season,” Compher said of Colorado’s Big Three. “The depth guys, we’ve got to step up when we can. Guys were stepping up all over the place and that’s why we’re in the spot we are.”

That spot is one win away from Colorado’s first appearance in the conference finals since 2002. Getting there hasn’t been easy. The Avalanche had to knock off the top seed in the West, Calgary, in the first round and has never led in this series with the Sharks taking all the odd-numbered games and Colorado answering after that.

Not going to be easy

Even the Game 6 win at home proved treacherous with the Avalanche blowing a one-goal lead three times before finally winning on Landeskog’s overtime goal.

“We knew it wasn’t supposed to be easy, nobody said it was going to be,” Landeskog said. “For us we try to reload. As frustrating as it was to keep losing those leads we tried to reset and go back at it.”

Facing elimination isn’t a new feeling for the Sharks, who won three win-or-go-home games in the first round against Vegas when they overcame a 3-1 series deficit for the first time in franchise history.

This veteran team is playing its third Game 7 at home in the past four years, having beaten Nashville in the second round in 2016 and the Golden Knights two weeks ago.

“Instead of a fear or a nervousness there’s an excitement about them,” DeBoer said. “We do have guys that have participated in them in the past. Does that count for anything? I don’t know. I’d like to think it does. I do know this. Our guys have a comfort level in big games.”