Tuukka Rask bailed out his teammates with an astonishing 14-save second period and then the power play rescued the Boston Bruins early in the third of the East final opener against the Carolina Hurricanes.

Down by a goal, Bruins left wing Brad Marchand set up power-play goals 28 seconds apart for Marcus Johansson and Patrice Bergeron to push Boston to a 5-2 come-from-behind win before a delighted crowd at TD Garden.

Rask, who was coming off a second-round series-clinching shutout on Monday, continued his fine form with a 30-save performance for his 44th career playoff victory. There was nothing easy about the Bruins’ fourth win in a row.

They swiftly found out why the Hurricanes had won six straight to surprise the defending-champion Washington Capitals in seven games and sweep the New York Islanders in the previous round.

Boston was introduced to the feistiness of forwards like Warren Foegele and Brock McGinn and how stingy the Hurricanes top-four defencemen of Dougie Hamilton, Brett Pesce, Jaccob Slavin and Justin Faulk have been.

Boston Bruins’ Charlie McAvoy escapes with a minor penalty after levelling Columbus Blue Jackets’ Josh Anderson with a hit to the head late in the second period of Game 6. 1:06

Carolina limited Boston to only 28 shots on goal. The Hurricanes also beat the Bruins in the face-off dot, an area they dominated in the first two rounds against the Toronto Maple Leafs and Columbus Blue Jackets.

Led by Lucas Wallmark, who won 11 of 15 draws, and Greg McKegg (5-of-8), the Hurricanes won 53 per cent of the face-offs. Bergeron, the playoff leader with a 61.2 per cent success rate, uncharacteristically lost nine of his 15 draws.

But the Hurricanes learned a hard lesson with discipline.

They seemed in control of this game after Greg McKegg streaked in to score the go-ahead 2-1 goal midway through the second period.

The Hurricanes, however, took four consecutive minor penalties in a stretch from late in the second period and early third period. It was Jordan Staal’s unnecessary boarding penalty against Boston fourth-liner Chris Wagner that resulted in Johansson’s game-tying goal. 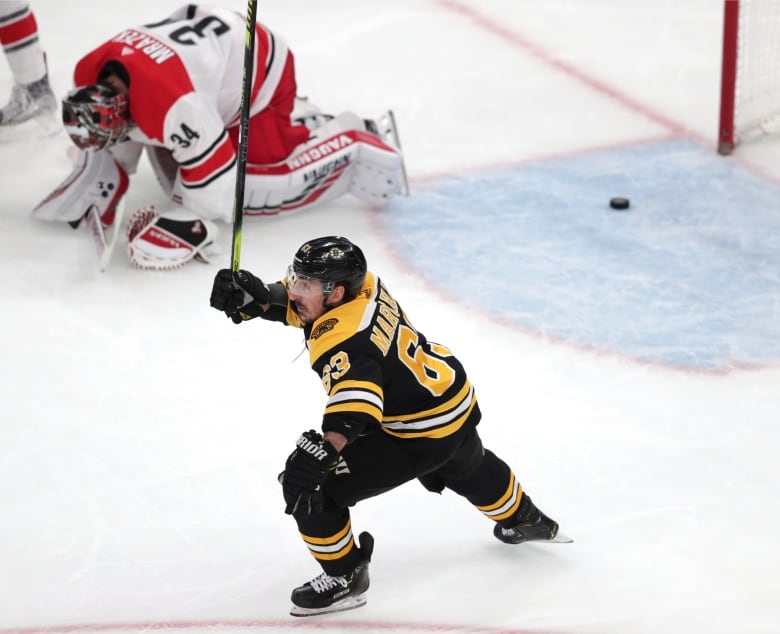 Hamilton then was called for roughing on Wagner’s linemate Joakim Nordstrom. It took Bergeron only 13 seconds to score the game-winner on that power play.

The Hurricanes knew they had to stay out of the penalty box.

Their penalty-killing unit was a middling 75 percent (27-of-36) in the first two rounds.

Meanwhile, the Bruins had scored 10 man-advantage goals in 13 games. This was a tough loss for the Hurricanes because they wanted to take advantage of the absence of Boston defenceman Charle McAvoy.

He was sitting out his one-game suspension for his headshot on Columbus forward Josh Anderson on Monday.

Steven Kampfer replaced McAvoy, while Connor Clifton moved up from the third pairing to play alongside captain Zdeno Chara. Kampfer had not played since Game 3 of the opening round and gave the Bruins an immediate lift for an early 1-0 lead.

But the Hurricanes were quick to draw even with a power-play goal from Sebastien Aho after McGinn lured Kuraly to take a roughing penalty. Kampfer couldn’t get over in time to stop McKegg on his go-ahead goal.

The Hurricanes also had goalie Petr Mrazek (lower body) and forward Micheal Ferland (upper body) back in the lineup, and both played well enough. But the opening night of the East final opener belonged to Rask and the Bruins power play.

Otherwise, it may have been Carolina coach Rod Brind’Amour and his side doing the celebrating.