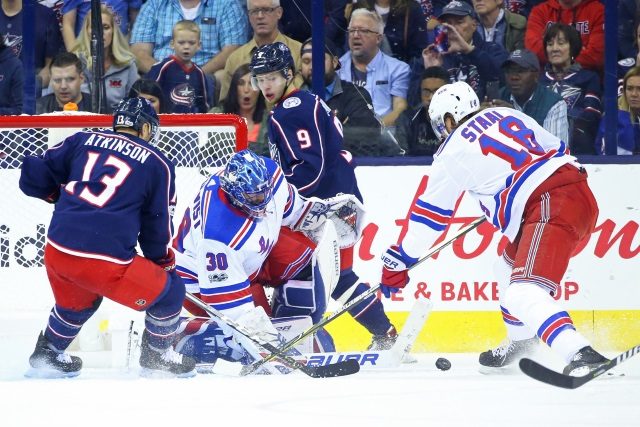 Will Henrik Lundqvist finish his career with the Rangers?

“I don’t know if I’ll stay with the Rangers my entire career,” said the 37-year-old goalie, who has two seasons remaining on a seven-year contract he signed Dec. 4, 2013. “I have two years left on my deal and it has always been my goal to stay with the Rangers, but once you get up there in age you never know. I know what I want, but if the club has other ideas I know I’ll have to listen. You can’t just do your own thing.

“Sometimes the dream might not work out in the end … we’ll see what happens. Right now all my focus is on the upcoming World Championships.”

Larry Brooks of the NY Post: Lundqvist wanted to clarify his comments that he made to Expressen.

“What I meant is that a player never becomes bigger or more important than an organization. While it is still my goal to win the Cup in New York before I retire, at the same time I understand as a player that I have to respect the position we are in and process we are going through.”

Some potential offseason moves for the Rangers

Larry Brooks of the NY Post: It appears likely the John Davidson could exercise his out clause with the Columbus Blue Jackets and potentially return to the New York Rangers.

The potential of Davidson could aid in GM Jeff Gorton’s attempt to lure Blue Jackets pending UFA forward Artemi Panarin to the Rangers. The Rangers could be in a bidding war with the Florida Panthers, and possibly the New York Islanders and Chicago Blackhawks.

The Rangers will need to decide if they want to extend forward Chris Kreider this offseason. A six-year extension could cost between $37 and $42 million.

Are the Rangers able to trade defensemen Kevin Shattenkirk and Brendan Smith, or do they consider buying them out?

After signing their RFAs, they could have at least $12 million in salary cap space to work with.

The Rangers could use a top-pairing right-handed defenseman and a top-six winger that has a physical presence.

If they need to go the trade route, potential options could be Vladislav Namestnikov, Jimmy Vesey. Shattenkirk, Smith and Kreider and possibly Neal Pionk and Pavel Buchnevich.

Caufield opted for surgery with Habs out of playoff race
Maple Leafs’ Murray (ankle) out through bye week
CAA signs eight in initial women’s hockey push
Canucks acquire Raty from Islanders
Trade grades: Horvat fills a need for the Islanders — but at a high cost