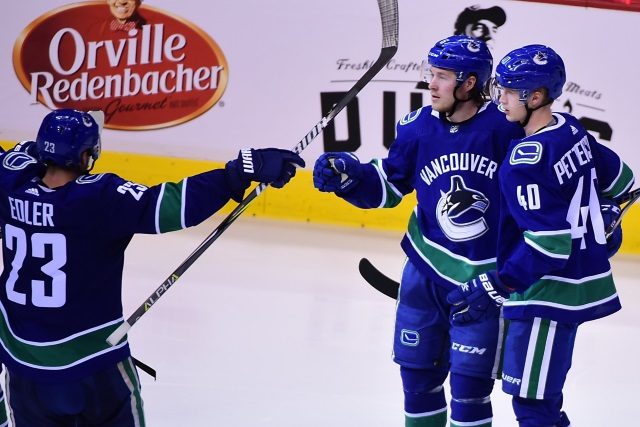 Rick Dhaliwal: Have been told that the Vancouver Canucks won’t be qualifying restricted free agent forward Brendan Gaunce. The 2012 first-round pick could use a change of scenery.

Canucks could use a top-six forward and a top-four defenseman, possibly two

Iain MacIntyre of Sportsnet: The Canucks could use another winger for the line of Bo Horvat and Tanner Pearson, one that could help their power play.

Sven Baertschi could develop into a top-line player but the 27-year old missed most of last season with a concussion.

Nikolay Goldobin may be out of chances in Vancouver.

The Canucks could use another reliable defenseman, potentially the need for two if Alex Edler leaves via free agency.

They have around $26 million in cap space but a contract for Brock Boeser and Edler could eat up half that. They need to keep in mind that Elias Pettersson and Quinn Hughes will need big extensions in two years.

Canucks GM Jim Benning on their cap space and adding to their roster.

“I don’t think it’s as much as people think,” Benning agreed. “We’re continuing to talk to Alex Edler and try to figure out a new deal for him there, and we’re in conversations with Brock and his camp. I don’t think we’re going to be going crazy with a lot of the top-end guys (in free agency).

“Whether it’s a player good enough to complement Pettersson and Boeser or complement Pearson and Bo, if we can add a player through free agency or trade that fits in with those guys, I think it’s going to improve our group.”

Patrick Johnston of the Vancouver Province: Vancouver Canucks forward Loui Eriksson has been frustrated with how things have gone in Vancouver, but he has no plans on retiring.

In an interview with Swedish site HockeySverige he noted that his role with the Canucks hasn’t been consistent and was used more in a defensive role this past season and hasn’t received “so much ice time.”

“The coach and I don’t really get on 100 per cent,” he acknowledged about his relationship with Travis Green. “It is difficult when I do not get the same trust that I received from all the other coaches I had during my career. Of course it is tough on that front.”

Eriksson’s ice was 18:41 under Willie Desjardins during his first year but has decreased under Green from 16:16 to 14:04 this past season.