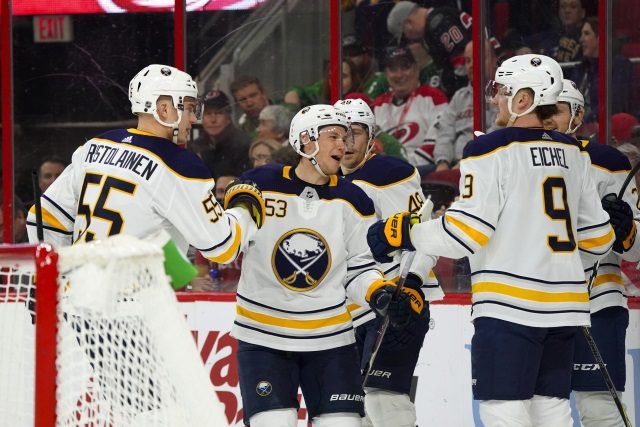 Sabres looking for NHL experience in their next coach

Chris Johnston: Head coach Rikard Gronborg signed with ZSC Lion for two years. There is no “out” clause in his contract.

John Vogl: Gronborg in a text: “The main reason that I signed with ZSC, besides being the top job in Europe, is that no NHL team wanted a coach with no prior NHL head coaching experience. … My goal is to coach in the NHL sometime in the future. Just need to get a chance.”

John Vogl: According to a source the Buffalo Sabres never ended up interviewing Gronborg.

John Vogl: Source said that Sabres GM Jason Botterill has a “strong preference” to hire some that has NHL experience.

Sabres in a rush

WGR 550: Darren Dreger recently on WGR 550 on the Sabres coaching search: “My sense is that Botterill will continue to do his research and conduct some interviews over in Slovakia. We know it’s the usual suspects: Jacques Martin, Todd Richards, Dave Tippett although it seems to be a bit of a long shot, and maybe they wait for Sheldon Keefe.”

WGR 550: Dreger continued: “There is no rush for Botterill, and you’re probably looking at the end of the month for any decision to be made.”

No decision on Pominville yet

Paul Hamilton of WGR 550: The Sabres haven’t made a decision on pending UFA Jason Pominville yet. He’d need to take a big pay cut to return. When asked if he wants to be back:

“I feel good, my body feels good, I feel like I can play, but I definitely need time.”

Some offseason to-do notes for the Sabres

John Vogl of The Athletic: An offseason to-do list for the Buffalo Sabres.

Hire a coach – They will wait until they find the perfect fit.

Re-sign Jeff Skinner – Contract talks continue but July 1st is getting closer. Would be a big hit if he left.