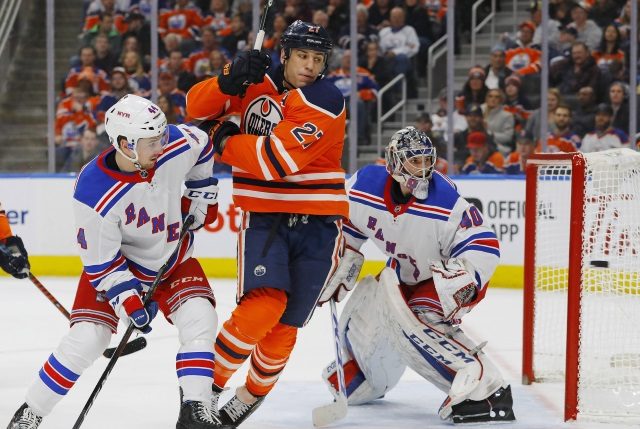 Jason Gregor:  A goalie remains a priority but Ken Holland tends to want a goalie who will be effective in his system. That requires going out and finding one via free agency. Trade is not a likely option at this juncture.

Is Milan Lucic movement not as costly?

David Staples of the Edmonton Journal:  A reasonable ending is possible with Milan Lucic as he does have some value. There exists at least one “poisoned pill” on every NHL team. It becomes about finding the right one(s) to salvage trade value. Holland cannot be forced to retain the max ($3 million per year), forced to add a sweetener or worse take on another equally bad deal.

Milan Lucic carries value as a fourth and maybe even third-line forward who can be physical. Also, he can score a little bit just not in Edmonton. A change in scenery serves all parties involved best.

One of the best scenarios involves the Vancouver Canucks and tweaking the retention rate depending on the addition of draft picks or players. It is something to keep an eye on as the draft approaches.

Allen Mitchell of The Athletic:  Ken Holland finds himself with at least one willing trade partner to consider a significant acquisition. The Tampa Bay Lightning crank out top forwards at too high of a rate.

When they inevitably sign Brayden Point, Tampa will have to make moves. One of those may be Tyler Johnson, who still provides solid offense at a less prohibitive cost.

The other move maybe Florida if they sign Artemi Panarin and Sergei Bobrovsky. Yes, Mike Hoffman could be available which would boost the Oilers power play immensely for starters. His 5-on-5 numbers plummeted which means a prime buy-low candidate. There remains a very slight possibility that Milan Lucic could be moved to one of these locations.

After that, finding value free agents could be profitable. Joonas Donskoi and Brandon Pirri may be options that could fit among others. Signing Alex Chiasson to another value deal helps also.

Lastly, trading defense for the offense is a possibility among the AHL ranks. Could Taylor Raddysh (a top ten Tampa prospect) be a player Ken Holland eyes? He is one along with Aleksi Saarela of the Charlotte Checkers.