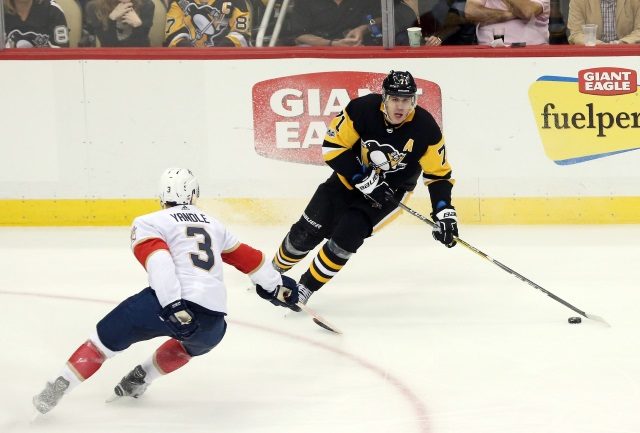 Phil Kessel and Kris Letang are the notables most often mentioned as possible trade candidates. Of late, however, center Evgeni Malkin also became the subject of recent media trade chatter.

Malkin netted 72 points in 68 games this season. Nevertheless, the 32-year-old center faced criticism for his overall performance and attitude. That gave rise to suggestions a Malkin trade could be among their offseason options.

The Penguins must shed salary and get younger in a hurry to remain among the Stanley Cup contenders. Malkin is signed through 2021-22 with an annual average value of $9.5 million. Swapping him for an affordable, talented youngster would address that need.

The most eye-popping rumor came from Dan Kingerski of Pittsburgh Hockey Now. He recently cited sources within the Penguins organization and around the league claiming the Malkin trade rumors are true. Kingerski added the Florida Panthers were said to be interested.

The Panthers supposedly wish to add some star power to boost a dwindling fan base and make the club competitive again. The addition of Malkin could also help their efforts to woo Columbus Blue Jackets winger Artemi Panarin via free agency in July.

Kingerski felt the asking price would be “a high scoring forward, a prospect, and a first-round draft pick.” He suggested Panthers left wing Jonathan Huberdeau as the scoring forward in that return.

According to Kingerski, nothing’s been decided yet regarding Malkin’s future in Pittsburgh. He also acknowledged the long-time Penguin must waive his no-movement clause for any deal to take place.

For the Penguins, that’s a terrific deal. Huberdeau is 25, carries an affordable $5.9-million annual average value through 2022-23, and is coming off a career-high 92-point season. He also lacks no-trade protection until July 1, when his full no-movement clause kicks in.

But why would the Panthers do this? Sure, Malkin is a well-known superstar who could boost ticket sales. If the Panthers can also sign Panarin, he and Malkin could provide a significant one-two scoring punch.

Malkin, however, doesn’t address the Panthers’ glaring need for a reliable starting goaltender. Roberto Luongo is 40, injury-prone and past his prime. James Reimer is a decent backup but ineffective as a starter. Sam Montembeault has promise but needs more grooming before he’s ready for prime time.

It’s believed Panthers general manager Dale Tallon will target Columbus Blue Jackets netminder Sergei Bobrovsky via free agency this summer. Signing the two-time Vezina Trophy winner, however, will cost a lot of money, perhaps as much as $10 million annually on a long-term deal.

Cap Friendly indicates the Panthers have over $61.9 million invested in 16 players. Assuming Tallon swaps Huberdeau for Malkin’s $9.5-million annual cap hit and signs Bobrovsky, that won’t leave much to sign Panarin. As this summer’s top UFA, he’ll seek top dollar for his services. If Tallon acquires Malkin and Panarin, he can forget about adding Bobrovsky.

Acquiring Malkin is not only be a luxury the Panthers can’t afford, but it’s also one they don’t need.

The Panthers were ninth this season in goals for per game (3.22) but had the fourth-highest goals-against per game (3.33). They had no problem scoring goals, they just couldn’t prevent other clubs scoring against them.

They already have a first-line center in Aleksander Barkov, who’s perhaps the most underrated two-way player in the league. Huberdeau, meanwhile, is coming into his own as an offensive talent.

That’s not to say the Panthers shouldn’t bring in another scorer. The 27-year-old Panarin, who’s in his playing prime, would be a fine addition. Still, Tallon would be foolish to bolster an already potent offense at the expense of his club’s biggest needs.

Tallon’s expected to make a bold move or two in hope of turning his club into a serious playoff contender. Signing a top-flight goaltender like Bobrovsky and perhaps adding an in-his-prime scorer like Panarin could do the trick.

A better option would be signing Bobrovsky and signing a UFA blueliner like Tyler Myers or trading for Winnipeg rearguard Jacob Trouba.  Add a scorer after those moves if there’s sufficient cap space left to do so.

Trading away their top-line left winger for an aging center, at the expense of their bigger roster needs, makes no sense at all.