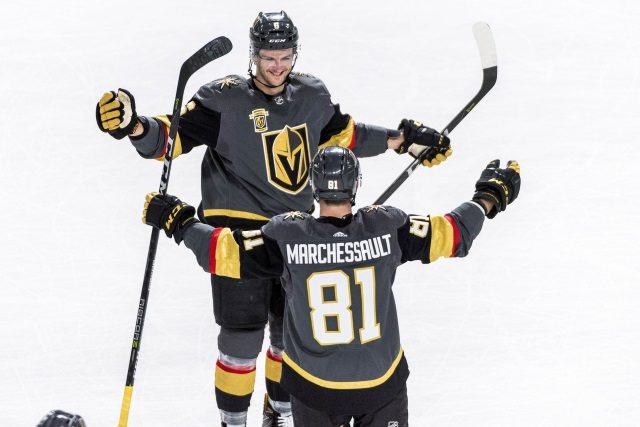 Elliotte Friedman of Sportsnet: Sources are saying that Ralph Krueger is climbing on the Buffalo Sabres list of potential coaching candidates. It’s believed that Jacques Martin is out. Dave Tippet may be more destined to the Edmonton Oilers. John Shannon reported that Todd Richards is out.

Toronto Maple Leafs assistant coach Jim Hiller isn’t expected back. The Nashville Predators are one team that is interested.

Some executives think the Evgeni Malkin trade rumors will die down.

Minnesota Wild defenseman Jared Spurgeon has a year left at $5.2 million. They’d ideally re-sign the 30-year old but he’s their best trade chip and there is already interest.

It would be a surprise is Wild winger Jason Zucker is back.

The Vegas Golden Knights weren’t interested in just giving away defenseman Colin Miller at the deadline. Teams will also be calling about RFA William Karlsson and Jonathan Marchessault.

The Colorado Avalanche have always said if you’re trading for defenseman Tyson Barrie it will be a ‘hockey trade.’

Tyler Myers days in Winnipeg may not be over. Could depend on if the Jets trade Jacob Trouba. The Jets likely can’t offer Myers what the open market could.

The Vancouver Canucks are expected to re-sign Luke Schenn. There is a possibility that only one of Alex Edler, Ben Hutton and/or Chris Tanev will be back.

The Nashville Predators would need to clear some space to sign Matt Duchene. The Montreal Canadiens would likely also be interested.

Talk that the New York Islanders are trying to get Brock Nelson re-signed.

The Calgary Flames and Ottawa Senators are among the teams interested in Sweden’s Joakim Nygard, who intends to come over next season.

Before the Edmonton Oilers hired Ken Holland, they were considering buying out the last four years of Milan Lucic‘s contact if they couldn’t find a trade.

The Ottawa Senators will try to sign Thomas Chabot to a long-term extension after July 1st.

Vancouver Canucks hire former Panthers GM Dale Tallon as pro scout, senior adviser
NHL experiencing sustained growth with female, younger fans
Avalanche visit the Lightning with 3-2 series lead
Wolves one win away after Game 4 triumph
Avs a win away from the Cup: What we learned in the Game 4 OT thriller