Ralph Krueger is returning to North America to coach the Buffalo Sabres in a bid to turn around the once-proud franchise in the midst of an eight-year playoff drought.

The NHL team has scheduled a news conference for 12:30 p.m. ET to introduce the 59-year-old former Edmonton Oilers bench boss.

Krueger becomes Buffalo’s fifth coach since Lindy Ruff was fired in February 2013. None of Ruff’s replacements have lasted beyond two seasons.

The Sabres are in the midst of their worst stretch in franchise history. They’ve finished last in the standings in three of the past six seasons and haven’t won a playoff round since 2007, when they lost to Ottawa in the Eastern Conference final.

“I am excited and honoured to join the Buffalo Sabres family and will strive to maximize the potential that lies within this team,” Krueger said in a statement released by the team. “I look forward to building on the many positives that have been established within the organization and I am especially eager to get behind the bench and represent this passionate hockey city.”

Krueger was behind the Oilers bench during the 2012-13 lockout-shortened season and was later fired via Skype after the youth-laden club posted a 19-22-7 record.

He inherits a Sabres outfit that lacks chemistry and has struggled to build on a foundation of several talented youngsters, including captain Jack Eichel and defenceman Rasmus Dahlin, the first player selected in the draft last year.

Krueger has vast coaching experience, including overseeing Switzerland’s national team to Winter Games appearances in 2002, 2006 and 2010.

He returns to the NHL after spending the past five years as chairman of soccer’s Southampton F.C. of the English Premier League. Krueger was born in Winnipeg, Manitoba, and played hockey professionally in Germany from 1979 to ’91.

“Throughout his career, Ralph has shown the ability to adapt to a variety of high-pressure environments while leading some of the world’s elite players,” Sabres general  Jason Botterill said. “His strong communication skills, leadership and diverse background make him a uniquely qualified candidate to lead our team going forward.”

Krueger replaces Phil Housley, who was fired after just two seasons, including this past year when Buffalo won just 16 of its final 57 games following a 10-game winning streak in November.

In finishing 13th in the Eastern Conference standings, the Sabres joined the 2016-17 Philadelphia Flyers in becoming the second of 50 NHL teams to miss the playoffs in the same season they won at least 10 straight games.

The hiring came as Botterill returned to Buffalo for a number of scouting meetings this week. He had been in Slovakia working as a management member of Canada’s national team competing at the world championships.

Krueger’s experience includes coaching Team Europe to second at the 2016 World Cup of Hockey. He also served as a special adviser to Canada’s national team when it won gold at the 2014 Sochi Games.

He’s known for being an innovator in hockey strategies, developing young talent and a motivator. In 2014, he also authored a book, which was published in German and titled Teamlife — Beyond Setbacks to Success.

Krueger’s hiring allows Botterill to turn his attention to the Sabres’ next most pressing off-season need, and that’s making a bid to re-sign forward Jeff Skinner before he enters the free-agent market on July 1.

Skinner was acquired in a trade with Carolina in August, and scored a career-best and team-leading 40 goals in 82 games last season. 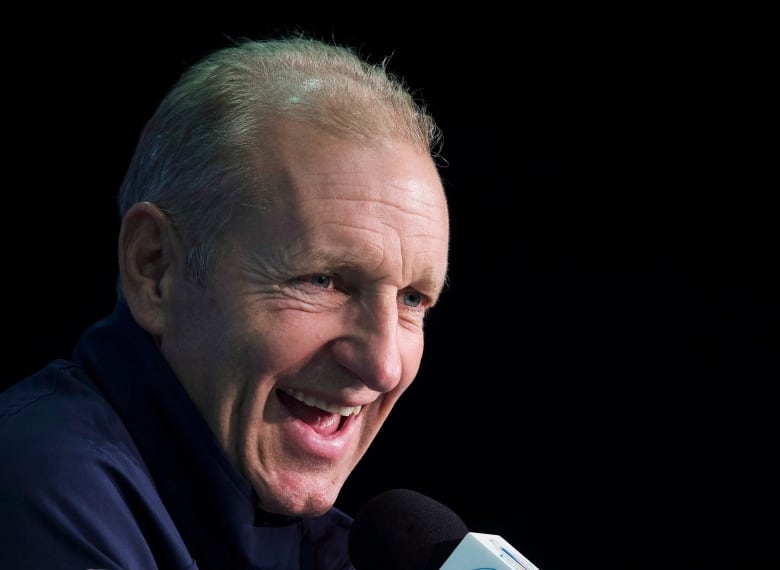 Ralph Krueger’s previous NHL stop was in Edmonton, where he guided a youth-laden club to a 19-22-7 record in the lockout-shortened 2012-13 season. The team then fired the 59-year-old via Skype. (Nathan Dennette/The Associated Press)

Though Skinner and the Sabres have engaged in contract talks since January, the team elected to put off further discussions until completing its coaching search. In clearing out his locker in April, Skinner did not rule out re-signing with the Sabres while adding he also didn’t want to rush into making his decision.

The latest shake-up in Buffalo comes two years into Botterill’s tenure as a first-time GM and after his decision to hire Housley proved to be a bust.

Though Botterill said the blame for the Sabres collapse deserved to be shared among players and himself, he added it became evident the team was not responding to Housley.

“Unfortunately, the message wasn’t getting through,” Botterill said when he fired the coach a day after the Sabres closed their season.

Secondary scoring has been an issue, with Skinner, Eichel and Sam Reinhart accounting for 90 of Buffalo’s 226 goals last season. The Sabres also committed far too many familiar defensive lapses for a team coached by a Hall of Fame defenceman.

Housley’s largest failure was an inability to have the Sabres adapt to playing the creative, high-tempo style that relied on defencemen in jumping into the rush.