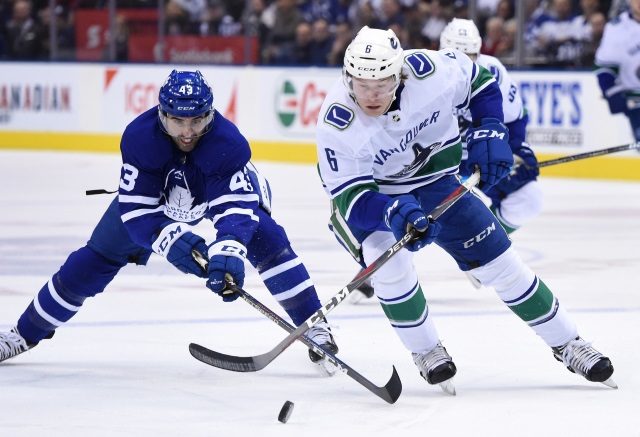 Ristolainen had been in the rumor mill

WGR 550: Buffalo Sabres GM Jason Botterill on defenseman Rasmus Ristolainen: “We need top-four guys that can handle several different things on the blue line. He certainly has his faults, but we like what he does with his matchups. It’s our job to surround him with enough talent and skill to help him be better.”

WGR 550: Botterill continues: “I think players continually develop. At the age he’s at, there’s still plenty of development going on with Ristolainen.”

Rick Dhaliwal: Things are quiet with regards to a contract for Vancouver Canucks restricted free agent defenseman Ben Hutton. He’s a year away from being a UFA and is arbitration eligible.

Alex Edler – there is still a lot of work to do.

Luke Schenn – don’t think that any contract talks have started between the two sides.

Dan Murphy: Contract talks with RFA Brock Boeser continue. Things are not moving quickly but it’s not a concern.

McKenzie notes on the Maple Leafs

Ryan Fancy: Bob McKenzie said that he believes Ilya Mikheyev is a lock to make the Toronto Maple Leafs next season, well at least at the start of the season.

Ryan Fancy: McKenzie also said that the Maple Leafs will probably look to bring defenseman Ron Hainsey back on a one year contract and pair him with Morgan Rielly again.

Draglikepull: McKenzie says that the Maple Leafs have looked at Canucks defenseman Chris Tanev in the past but there are concerns surrounding his injuries. Tanev likely wouldn’t bring the much of trade return at this point.

Jokerit Helsinki: Eemeli Rasanen will be returning to Jokerit next season after spending a few months with the Toronto Marlies.