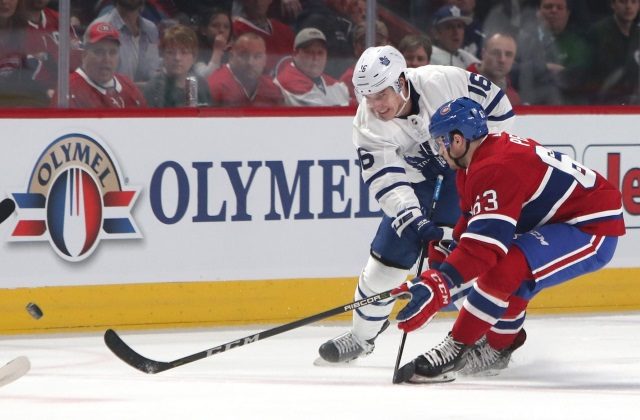 Eric Engels of Sportsnet: The Montreal Canadiens desperately need another top-four defenseman – one that is left-handed and can play on the power play.

It’s something that GM Marc Bergevin may need to overpay for.

At the top of the free agent list is Toronto Maple Leafs pending 28-year old UFA Jake Gardiner. Gardiner will likely be looking for six- or seven-year deal at more than $6 million a season. That price could be too steep for the Canadiens.

33-year old Vancouver Canucks Alex Edler could hit the open market. He’ll likely be looking for over $5 million a season and could be looking for a long-term deal.

The Canadiens may have to look at the trade market. Bergevin has said he doesn’t want to give up any top prospects for a short-term fix, but if they could land a defenseman that would fit long-term…

Would the Philadelphia Flyers consider moving Shayne Gostisbere – who has four years left at $4.5 million?

Would the Florida Panthers consider moving Mike Matheson to help free up cap space to possibly fit in pending UFAs Artemi Panarin and Sergei Bobrovsky? Would a package of the 15th overall pick, salary of Dale Weise and prospect Noah Juulsen work?

Pat Hickey of the Montreal Gazette: An ideal world would see the Montreal Canadiens be able to sign pending free agent Matt Duchene. Forward Artemi Panarin (likely heading to the Panthers) or defenseman Erik Karlsson would be nice as well.

The Canadiens could use a top-six forward and a top-four defenseman.

Rumors have the Canadiens interested in Duchene and they may have to overpay him at $8 to $9 million. The Canadiens could fit that in but have to keep in mind Max Domi needs an extension next summer. Brendan Gallagher, Phillip Danault and Tomas Tatar are UFAs after 2021.

An offer sheet for Toronto Maple Leafs Mitch Marner may be worth pursuing. GM Marc Bergevin did say after the season that offer sheets are an available tool.

An offer sheet between $8.54 and $10.56 million would cost the Canadiens two first-round picks, a second and a third. Bergevin may not like giving up the picks but it would be a fair price.

The Leafs can match that offer but it may be a win for the Canadiens as the Leafs would have another high salary.

Maybe an offer sheet for another Leafs player – Kasperi Kapanen.

Debating big questions on the Bruins: Team MVP, toughest challenger, trades to make
When the Penguins have an emergency, they call on someone from N.S. It’s not who you think
NHL Rumors: Bo Horvat And The Colorado Avalanche
Blackhawks & Oilers Could Make 2023 Trade Deadline Blockbuster
Maple Leafs captain John Tavares on the cusp of 1,000th NHL game