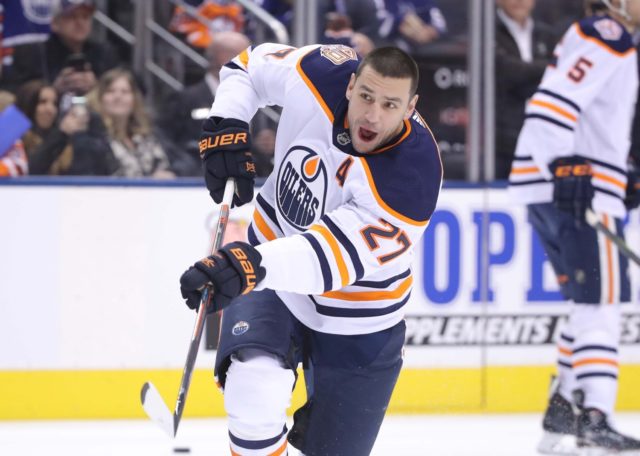 Lucic, 30, has four years left on his seven-year, $42-million contract. In his first season with the Oilers, he tallied 23 goals and 50 points. Since then, however, his production had plummetted. He scored 10 goals and 34 points in 2017-18 and just six goals and 20 points this season.

Over the past two years, Lucic’s decline made him a frequent subject for trade rumors. Given his $6-million annual average value and no-movement clause, a trade seems unlikely. The way his contract is structured also makes him almost buyout proof.

Nevertheless, hope exists among Oilers followers that Holland might have better luck moving Lucic than his predecessor. While anything’s possible, the new Oilers GM faces long odds finding a club willing to take Lucic off his hands.

Lucic’s recent comments to Vancouver’s Sportsnet 650 about one day playing for his hometown Canucks prompted some observers to suggest a swap for Loui Eriksson. Like Lucic, Eriksson is a struggling veteran winger who carries a similar cap hit with the Canucks, albeit for one fewer season.

Both players are in unhappy situations that could become distracting for their respective clubs. A trade could help one or both guys rediscover their form. Also, a buyout of Eriksson, while expensive, wouldn’t be as costly for the Oilers.

This presumes, however, Canucks GM Jim Benning would agree to this deal. At first glance, Lucic-to-Vancouver seems a perfect fit.

Benning knows Lucic from their days with the Boston Bruins. The rebuilding Canucks could use an experienced, physical leader with playoff experience. It’s assumed Lucic would waive his no-movement clause to come home.

Several factors, however, could prevent this scenario from taking place.

The NHL is trending toward younger, faster players like Vancouver’s budding stars Elias Pettersson, Brock Boeser, and Bo Horvat. Lucic’s slower, heavier style might not fit into the Canucks’ style of play.

Benning’s priority this summer is bolstering the Canucks’ porous blueline. That includes re-signing or replacing UFA defenseman Alex Edler. Only when that’s suitably addressed could he shift his focus to other roster matters.

Boeser, meanwhile, is completing his entry-level contract and due for a substantial raise. Benning must ensure sufficient long-term cap room for Boeser’s new deal.

If Benning moves Eriksson it’ll be a salary dump, packaging the winger with a draft pick or prospect. Swapping one toxic contract for another, especially one a year longer and more costly to buy out, doesn’t make sense.

If the Canucks aren’t an option, is there another possible destination for Lucic?  Thanks to his no-movement clause, the choices could be slim. He has full control over where he could go. He might be looking for a fresh start elsewhere but that doesn’t mean he’ll go just anywhere.

His contract remains a sticking point. Most teams will be reluctant to take on a $6 million annual salary-cap hit for the next four years. As always, the buyout breakdown isn’t palatable.

Holland could attempt to move Lucic to a budget-conscious club that must reach next season’s salary-cap minimum. That’s what he did with Pavel Datsyuk’s contract. When Datsyuk departed for the KHL in 2016, Holland bundled his rights in a package deal to the Arizona Coyotes.

The rebuilding Ottawa Senators would be a prime candidate. They have only $45.2 million committed to 14 players next season. The Senators, however, will likely balk at taking on Lucic’s contract unless Holland includes some enticing sweeteners in the deal.

Unlike Datsyuk, Lucic intends to remain an NHL player. He won’t be on another team’s books simply for accounting purposes. He’ll be expected to fill a roster spot. That could mean taking away a position from a younger, cheaper, more-deserving player over the next four years.

If Holland intends to move Lucic, he could end up having to absorb up to half of his $6-million cap hit. He might also have to include a draft pick, prospect or promising young player in the deal.

Maybe Holland can swing a deal that sheds most or all of Lucic’s contract without having to take back another toxic contract in return.  Perhaps he can bundle the winger off to another club without giving up too much in the package.

Given the significant obstacles, however, don’t be surprised if Lucic is still an Oiler when training camp opens in September.