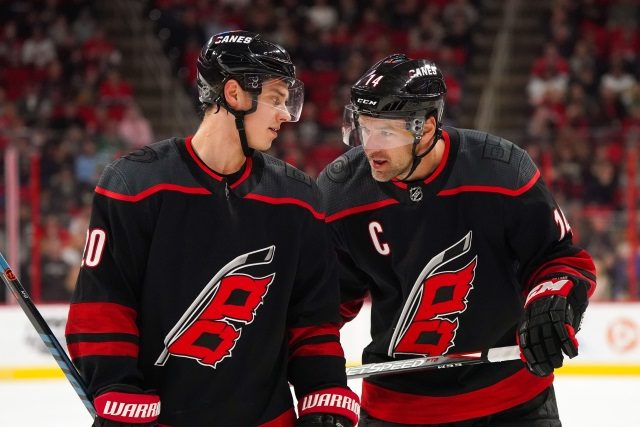 The Hurricanes will have some decisions to make in net, as well as up front

Brett Finger: Carolina Hurricanes pending unrestricted free agent goaltenders Curtis McElhinney and Petr Mrazek have both said that they would like to return next season. Both know that there is a chance that they won’t be back.

Mrazek said that he is happy that he signed a one-year “prove it” contract last offseason.

Chip Alexander: Restricted free agent forward Sebastian Aho won’t comment on any contract negotiations. Would only say that he hopes they are able to work out a long-term contract.

“I haven’t made a decision yet,” he said. “You don’t do those things irrationally. You put thought into it and put perspective. You find out inside whether you have the full capabilities emotionally and physically to do it.

“I put everything I had into this year. If I have everything again, I’m going to be here but I haven’t gotten that far yet. It will probably be a ways down the road before that decision is made.”

Curtis McElhinney said that management hasn’t let him know what they are thinking for their goaltending situation next year.

Chip Alexander of the Raleigh News & Observer: Four questions for the Carolina Hurricanes this offseason.

Does Justin Williams return? Could they re-sign Williams to a one-year deal at around the $4.5 million he made this past season?

How much will Aho make? The sides talked during the season and were not far apart but agreed to wait until after the season. They could use Evgeny Kuznetsov‘s eight-year, $7.8 AAV as a comparable.

What about the goalies? They could re-sign Petr Mrazek and use Alex Nedeljkovic as the backup. Scott Darling could be bought out.

Ferland or McKegg, both or Neither? Ferland was injured during the playoffs and didn’t score during their final 17 regular season games or in the playoffs. McKegg can play center and the wing and would think they’d like to him back.