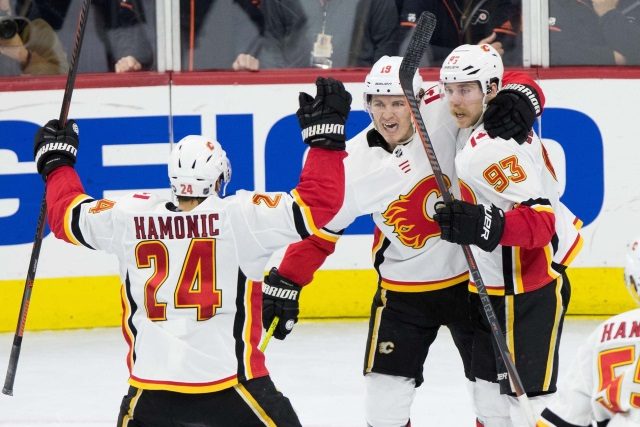 Eric Francis of Sportsnet: It may not be a crazy idea that someone will try to offer sheet Calgary Flames forward Sam Bennett.

Bennett is arbitration eligible and requires a $2.14 million offer from the Flames.

The Flames currently have about $14.5 million in cap space and fellow RFA Matthew Tkachuk could eat up between $8 and $9 million of that. The Flames also need to find two goaltenders.

They may need to clear out some salary cap space with candidates being T.J. Brodie and/or Michael Frolik. Michael Stone could also be bought out.

The Vancouver Canucks have around $30 million in salary cap space and could offer Bennett a deal in the $3 million per season range.

An offer sheet in the $1.82 million to $3.65 million range would only cost a team a second-round pick.

The Flames could match, but may not be happy with the dollar amount.

“You obviously have to offer more than he’d get in arbitration, so you’d have to overpay him,” said one league insider when asked about the move.

“But if you really believe in him the cost may be palatable in terms of picks. But it only works if the team is capped.”

Eric Francis of Sportsnet: In order to fit a Matthew Tkachuk extension in, the Calgary Flames will likely have to trade one of their veteran players.

T.J. Brodie and Michael Frolik could be moved.

“If five years is what Tkachuk wants he’s on the right track,” said one of the league’s most prominent agents.

“I would even argue four years, but the team won’t want that. I would use (Oilers forward Leon) Draisaitl as my floor to start negotiations (at $8.5 million annually). Tkachuk falls somewhere between $8.5 million and $10 million. I wouldn’t put him above (Auston) Matthews.”

Matthews is at $11.6 million and William Nylander comes in at $6.9 million.

The bar may rise for RFAs this offseason with the like of Mitchell Marner, Brayden Point, Mikko Rantanen, Patrik Laine, Timo Meier, Kyle Connor, Sebastian Aho, William Karlsson, and Brock Boeser also up for new deals.

One agent when looking at top restricted free agents.

“If I’m the team I want seven or eight years because I’m willing to overpay for the first few years, but the market will catch up to the deal,” said one agent, citing the lessons learned from contracts like Erik Karlsson’s.

“If I was repping (Tkachuk) I’d go four or five years. Look at Karlsson, arguably the top defenceman in the league. He locked in at $6.5 million (for seven years). Now he’s banged up as a UFA, and out of his prime, and he’s lost millions he’ll never get back.”

A two-year deal would be risky if an injury occurred and “you’re not setting up for life” according to an agent.

Tkachuk should be in the $9 million range.

Brodie or Frolik may need to moved around draft time. Brodie would have some trade value.