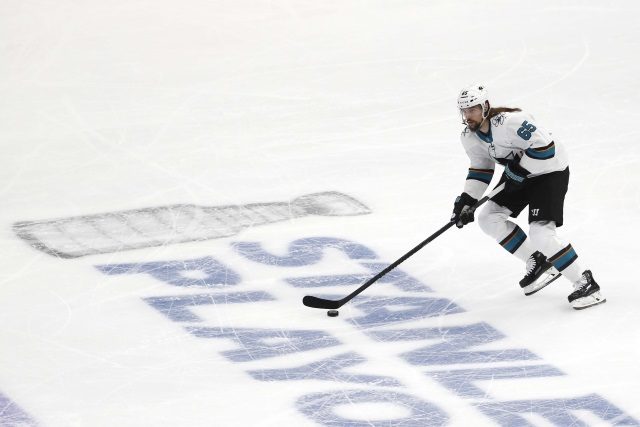 Erik Karlsson: “Thank you to the entire @SanJoseSharks organization, fans, and especially teammates. It was a great run that ended too early. But lots of great memories where created. The entire Bay Area has been nothing but classy and respectful to me and my family. Thank you.”

@Prospects_Watch: Elliotte Freidman said on the Fan 960 that he thinks Karlsson’s first choice would be the Tampa Bay Lightning.

Friedman also believes that Karlsson is considering having surgery for his injury. Speculation is that it’s his groin.

Would the Tampa Bay Lightning be able to fit Karlsson in?

Joe Smith of The Athletic: Erik Karlsson could sign with the Tampa Bay Lightning this offseason. It wouldn’t be easy for them to fit him in, as well as locking RFA Brayden Point in.

The Lightning are at about $73 million for 17 players.

Lightning executives have discussed the possibility of adding Karlsson, as well as some other free agents.

If Karlsson is looking for Drew Doughty money – $11 million – it won’t be from the Lightning. Have been told that if he’s okay with something in the $8 to $9 million range then there is a chance.

The Sharks and New York Rangers would be among the teams who would be interested in signing Karlsson.

If the Lightning are able to get Karlsson in the $8.5 million range, they are still going to need to clear a lot of space to fit him in and fill out their roster.

They will look to trade Ryan Callahan and his $5.8 million salary cap hit.

J.T. Miller has four years left at $5.25 million and his modified NTC doesn’t kick in until July 1st. Moving Callahan and Miller would free up $11 million if they could get just futures for them.

They would need to get some of their pending RFAs to re-sign for cheap.

The Lightning do need to keep in mind that goaltender Andrei Vasilevskiy has a year left at $3.5 million and will be needing a new deal. Mikhail Sergachev will also need a new contract next year.